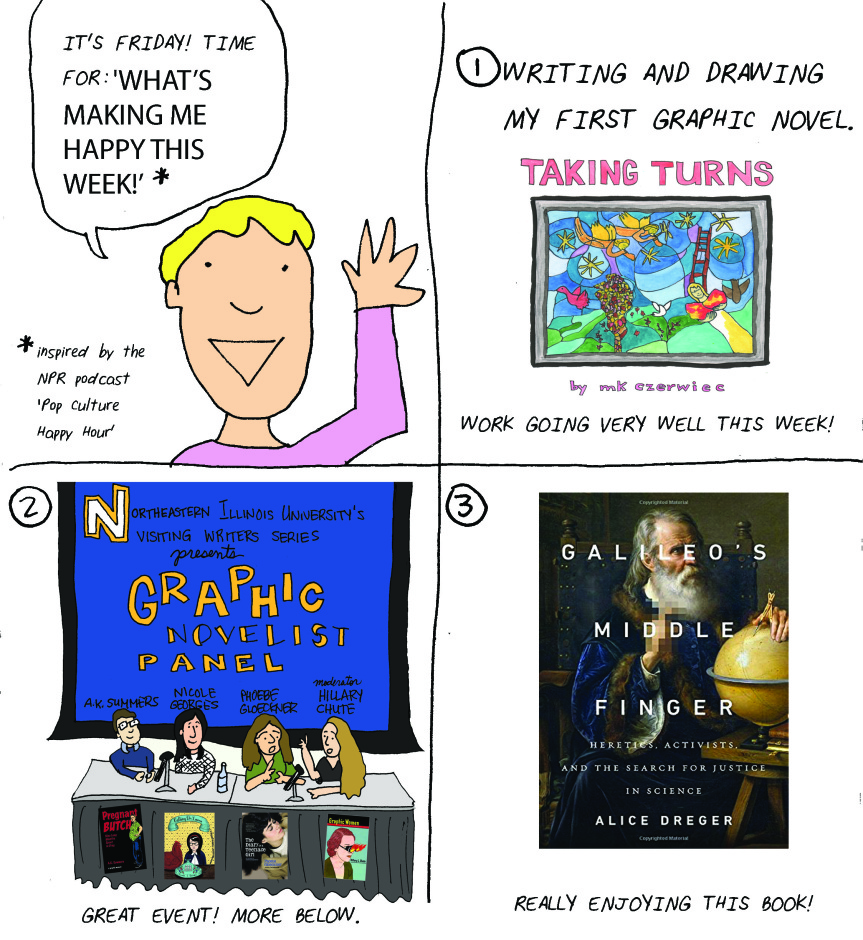 As I say above, I truly enjoyed a world-class event in my own backyard Tuesday. Northeastern Illinois’ Visiting Writers Series hosted a graphic novelist panel this year and it was terrific. Panelists each spoke individually and then sat down with Hillary Chute for a discussion of their work and chosen medium, comics. 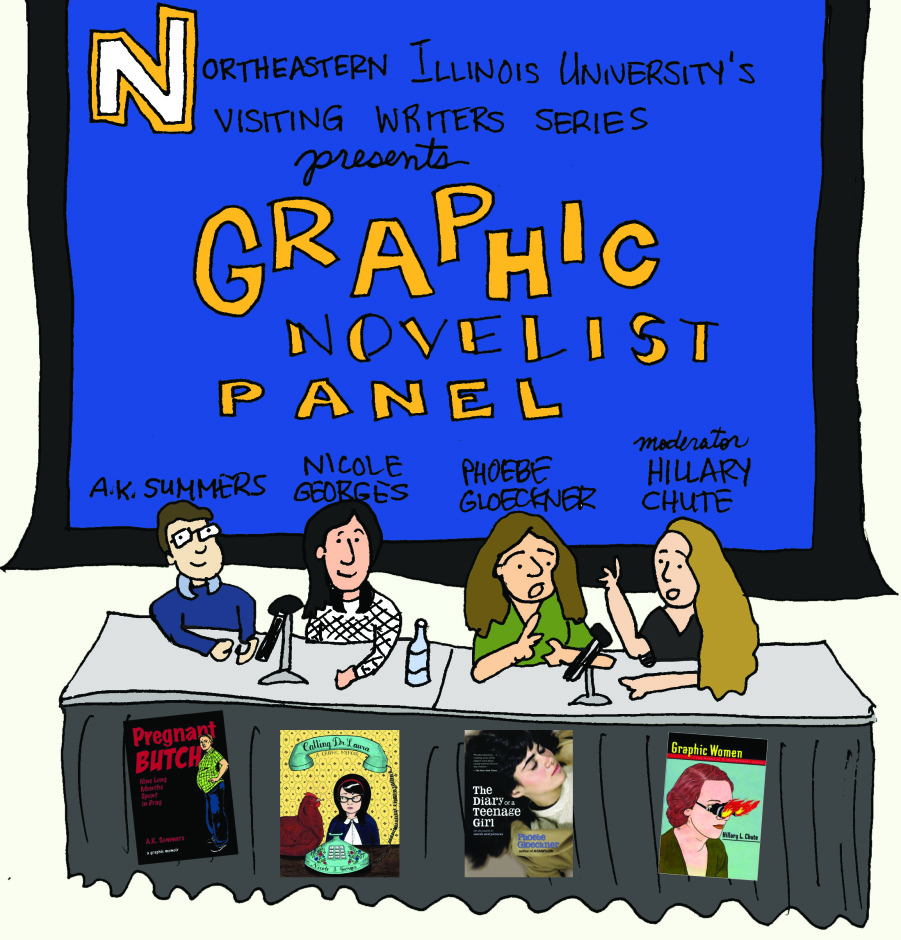 This panel was of particular interest to me. As some readers may know, I co-run GraphicMedicine.org, a website dedicated to the intersection of comics and health care. Each of these books was familiar to me via that work.

A.K. Summers’ Pregnant Butch has been on my ‘to read’ stack since I picked up a copy at SPX last fall. This event spurred me to read it and I thoroughly enjoyed the memoir. In this unique telling of her pregnancy, Summers grapples with not just the expected struggles and occasional joys of pregnancy, but also gender identity, the ways in which pregnancy challenged her identity as a butch. Even in writing that last sentence, I feel I’m being reductionist, it’s much more nuanced and complex and interesting than I’m articulating here. Summers’ talent as an artist is really apparent in this book, as she is able to toggle intentionally between several styles, even on the same page. She chose to discuss this in her talk, which thrilled me. This is the page she focused on, and discussed how a change of style and content from panel to panel was used to convey meaning. For example, between panels four and five, it is clear that her baby’s appearance isn’t all about her -complexities of personhood and relationship are embraced, as in that of her mother and her soon-to-be-born son. She said many more interesting things about this page, really adding to my enjoyment of it, but I recall most strongly (paraphrasing here:) “You draw shit in a comic, within seconds, there are flies.” 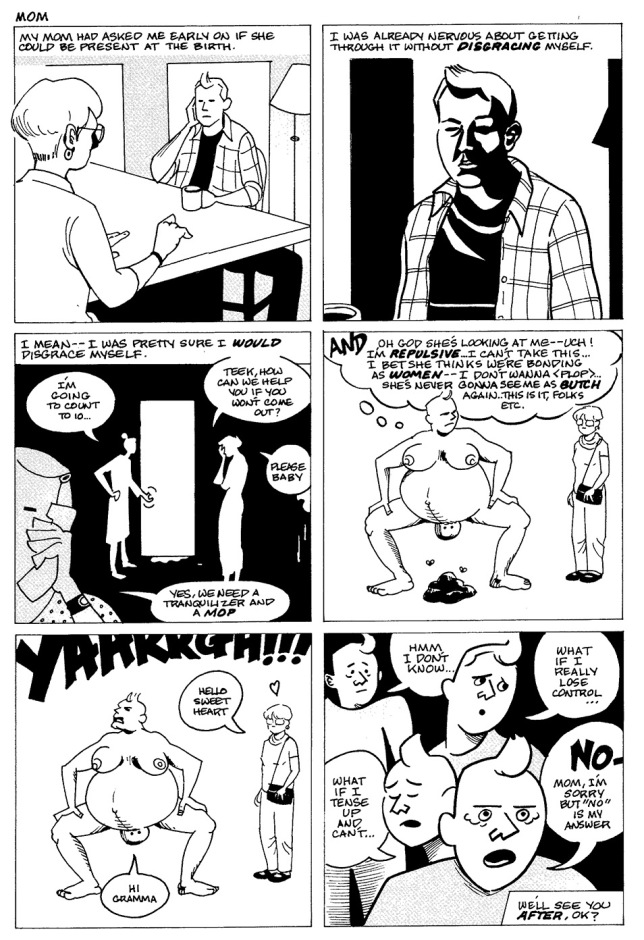 (BTW, the Graphic Medicine site still needs a review of this graphic memoir. If anyone is interested, email me.)

Nicole Georges’ Calling Dr. Laura was familiar from Graphic Medicine, but also from teaching Graphic Memoir at Columbia College last year. One of my students chose to report on this book and absolutely loved it. I agreed completely. Georges’ style – on paper and in person – is smart, charming, honest, confident, and complex. This book tells the story of Georges coming to learn that her birth father, whom she was told was dead, indeed is not, and the ensuing complication this brings to her family life. The story focuses around a call Georges made to the online advice radio host, Dr. Laura Schlessenger. 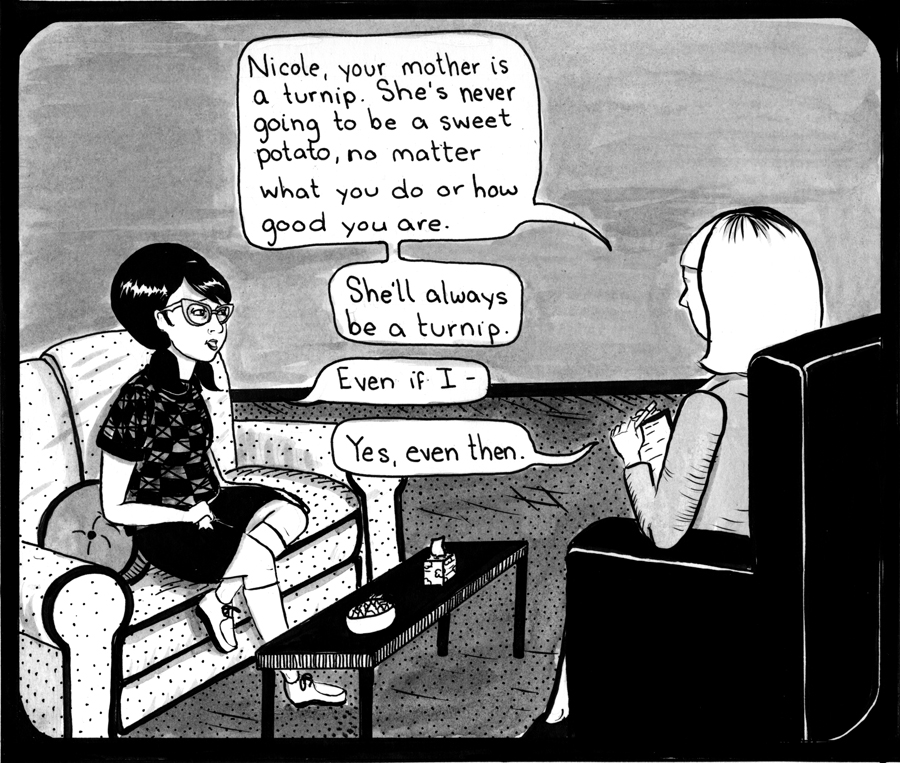 Phoebe Gloeckner spoke about her work historically, having started as a medical illustrator, the life experience that led up to her first book A Child’s Life And Other Stories, and her second book Diary of A Teenage Girl, the film version of which just premiered at SXSW, starring Kristin Wiig and Alexander Skarsgard. Gloeckner was a keynote speaker at the 2011 Comics & Medicine conference in Chicago, so I was familiar with her work, and especially curious to hear what she is currently working on. She picked up talking about her current project, which involves intricately sewn dolls, murders of girls in Juarez, Mexico and haunting photographic images.

The group sat down with University of Chicago scholar Hillary Chute, who is the author of Graphic Women (in which Gloeckner is included) and several other books, and the organizer of the epic 2012 Comics: Philosophy & Practice Conference, sometimes referred to as The Comics Summit, which gathered comics luminaries from all over the world.  If you like comics at all, check out some of the amazing panels. Chute was responsible for bringing that group of comics luminaries together, and for this alone she is legendary. Add her scholarship about comics, and her focus on the work of women, and you can begin to appreciate how cool she is.

The panel discussion was enlightening, challenging, and brought to light some interesting gaps between people who theorize about comics and people who make them. I find it always stimulating to stalk those gaps, to steal the analogy from Annie Dillard, because in those gaps inspiration often lurks.

One more exceptional aspect of this event to mention is the anchoring presence that the professors who organized and attended it brought. They are Ryan Poll (who has a very interesting TEDx talk on politics and civil discourse) and Alicia Erian. Erian’s love for writers and graphic novels was palpable, through her wonderfully narrative introductions of each speaker, to her impromptu encouragement of the speakers from the audience. The thoughtful and insightful questions from the Professors’ students, and the fact that few audience members left, despite the event going well over time, showed that these educators are doing their jobs well. They clearly are sharing their passion for reading, teaching, and learning. I found this to be the absolutely most inspiring facet of a very inspiring evening. 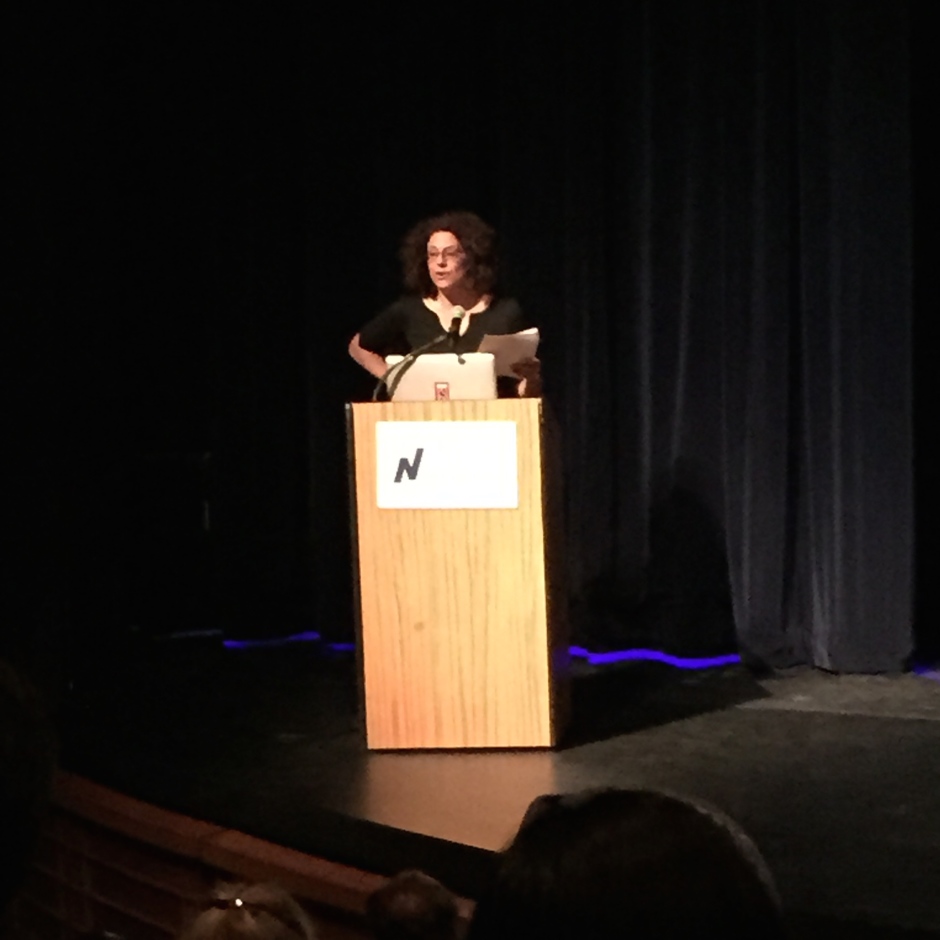