Last weekend I attended the Maine Humanities Council’s conference “After Shock: Humanities Perspectives on Trauma.” It was held in Washington DC at the historic Mayflower Hotel. The purpose of the conference was to, from the MHC website, “explore ways in which the humanities—including literature, theater and writing—can support the personal and professional development of health care professionals who work with war veterans and others who have experienced trauma.”

The conference opened with a compelling statement from Erik Jorgensen, the executive director of the MHC. “This is a conference on story, and how it can heal us.”

The thought-provoking opening plenary was by Jonathan Shay, MD, PhD, recipient of a MacArthur genius grant, and author of Achilles in Vietnam and Odysseus in America. His work involves counseling combat veterans, partly through reading and discussing Greek tragedy. In his plenary, Shea discussed the concept of moral injury, which he defined as “a betrayal of what is right by someone in legitimate authority in a high stakes situation.” As a result of moral injury, one’s moral and social horizon shrinks, leading to a berserk state. In a berserk state, the person psychologically damaged by the moral injury seeks to rain down destruction for it’s own sake, with no concern for their own safety. As I listened to Shea, it became clear that this kind of moral injury not only occurs on an individual level, but it seems to occur on a social level as well. As I listened to Shea break down his moral injury definition I did this quick comic in my sketch book. (Click to enlarge, and please excuse the bleed-through.) 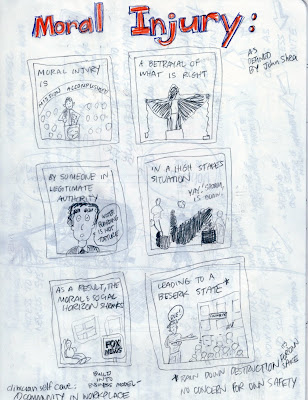 It was difficult to choose only one workshop to attend, because they all looked so informative and interesting, but they were unfortunately running concurrently. I decided on Maura Spiegel‘s “Films and Feelings, Beyond Spectacle to Process and Reflection” because I am a very big fan of Dr. Spiegel’s work, having come to know it through the Narrative Medicine program at Columbia. The workshop opened with the critical courtroom scene from an all-time favorite film, “To Kill A Mockingbird.” This scene very clearly illustrates, as Spiegel points out, “that sometimes filmmakers seem to have direct access to our central nervous system.” Though we have not lived the specific experiences portrayed in the clip, we still feel very “real feelings, with histories” (Spiegel) as we watch them. We watched and discussed clips from “The Thin Red Line,” “Saving Private Ryan,” “The Hurt Locker,” “Waltz with Bashir,” and “Home of the Brave.” Watching these mostly fictional film clips made very real the potential challenges returning veterans face. As Spiegel quoted Ellie Wiesel to state, “It’s not that I can’t explain that you won’t understand, it’s because you won’t understand that I can’t explain.” Spiegel said, “You need the story (of the film) to allow some feelings to happen… Stories can grow over a wound like a second skin.”
While listening to this presentation and watching the stirring clips, I sketched – and embellished – the beautiful stage from the Mayflower conference room, and later colored part of it. 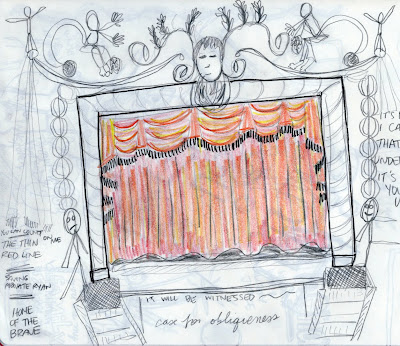 After lunch I attended a performance of “Theater of War.” The group was founded in New York by Brian Doerries. From the program, “Since 2008, Theater of War has presented readings of Sophocles’ Ajax and Philoctetes to military communities across the United States. These ancient plays timelessly and universally depict the psychological and physical wounds inflicted upon warriors by war. By presenting these plays to military audiences, our hope is to de-stigmatize psychological injury and open a safe space for dialogue about the challenges faced by service members, veterans, and their caregivers and families.” You can watch some performance excerpts here. The performance brought to life the work of Jonathan Shay from the opening plenary, on how ancient texts can be astonishingly healing for present-day veterans. The panel discussion with combat veterans and family members that followed the performance was quite moving.
During the next workshop session, my colleague Catherine Belling and I presented our contribution, “Graphic Witness: Comics, Drawing, and Trauma.” We had an engaged, cooperative, and appreciative audience. It was a thrill to present, and I am grateful for all I learned along the way toward doing so – about processing traumatic experiences with graphic narrative, both by reading and creating.
But again, I was sad to miss the other concurrent workshop sessions!
The next morning’s plenary was from Kate Braestrup, called “The Bad News and the Good News.” Braestrup is a chaplain with the Maine Game Warden Service. One of their jobs is to search out persons lost in the woods and waters of Maine. When people are missing and/or bodies are found, it’s Baestrup’s job to assist the game wardens in informing the family of the death. A short video of her describing her work can be seen here. Her talk was moving and informative. By temporarily going off the topic of war trauma, we were able to gain a new perspective on it. Braestrup’s most wonderful line was much quoted for the rest of the conference, “In difficult, painful situations, I cannot subtract pain, I can only add love.”
In addition to enjoying her stories and anecdotes, the talk made me want to visit Maine. It sounds like a gorgeous state with exceedingly nice residents.
From my sketchbook during this presentation:

The last workshop I attended was by two physicians, Hugh Silk of Massachusetts, and David Loxterkamp of Maine. In a very warm and personally vulnerable manner, they discussed some of the ways in which being a caregiver can negatively impact the caregiver. They encouraged participants to become aware of their own life narratives and “the story” that led them to pursuing a career in health care. The presenters maintain that these stories will, consciously or unconsciously, govern how an individual is responding – sometimes destructively – to the challenges of caregiving.
The closing plenary of the conference was given after lunch by author and Vietnam veteran Tim O’Brien. I hadn’t heard of O’Brien until just before being asked to present at the conference. A friend was having open-heart surgery, and another friend had brought his book The Things They Carried to read during the day-long waiting room vigil. As she passionately described O’Brien’s book (which she was re-reading) she told us about the title conceit – that the author weaves his stories around the tangible and intangible items he and his fellow soldiers carried in Vietnam to help them survive. On her recommendation, and in preparation for the conference, I read The Things They Carried. O’Brien describes in several ways how and why stories help us survive trauma. This one helped me greatly in the current project I am creating:

“By telling stories, you objectify your own experience. You separate it from yourself. You pin down certain truths. You make up others. You start sometimes with an incident that truly happened… and you carry it forward by inventing incidents that did not in fact occur but that nonetheless help to clarify and explain.”

O’Brien’s address to the conference was both insightful and challenging. He challenged caregivers to not see combat veterans as victims, because it strips them of their agency and their responsibility.
And that was my experience of the Maine Humanities Council’s After Shock conference. My only regret, as I have mentioned, is that I cannot know what the workshops I missed offered, and I wish there were a way to read a summary of each of those. I included my sketches from the conference partly so they don’t disappear into my archives, but also to illustrate (pun intended) that note-taking is not always text driven, and, as I try to point out in my teaching, doodling while listening can actually increase the amount of content absorbed, not distract from it, as some may assume.