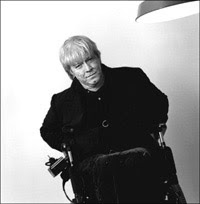 John Callahan died last Saturday in Portland. He was likely one of the first Graphic Medicine cartoonists, having published the somewhat illustrated Don’t Worry, He Won’t Get Far on Foot, The Autobiography of a Dangerous Man in 1989, well into his career. There’s a theoretical asterisk to his work in all of his obituaries, and certainly would also be found when discussing it in terms of Graphic Medicine (which I have never seen done) and I’m curious to explore it.

Callahan’s work generally remained on the periphery of mainstream acceptance due to its dark humor, often labeled inappropriate, or later and more damning, politically incorrect. I’m wondering today if others who make comics on medical themes were influenced by Callahan. I consider his comics and his autobiography an early influence on what I’m doing today. For example, I enjoy using a gag in my work that I just now realize comes from reading Callahan at an early age. I’m referring to the little wall plaques in the background of strips that always add an extra contextually-relevant laugh, like showing a hospital hallway, in which two patients are talking. The main joke of the strip is elsewhere, likely in the dialogue between the characters, but you can’t help notice the sign behind them reading, “Thank you for not dying.” In another example, we’re at an AA meeting. All of the participants are giving lame reasons why they drank, one being, “because my shoes were too tight” and the sign in the background reads, “Thank you for changing your entire life around.” Here’s an example of how I’ve obviously stolen this gag, here in the principal’s office of a Catholic grade school: 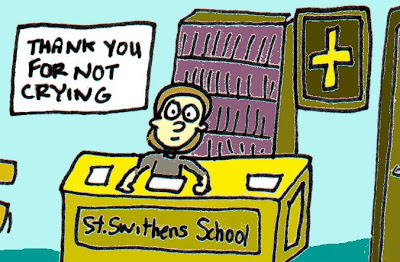 Politically incorrect or not, I certainly gained insight into the experience of living with a physical disability from reading Callahan’s work, and I cite Callahan as an influence on my website. Comics have a long, proud history of being inappropriate, as wonderfully displayed in the Rude Britannia exhibit at the Tate Modern. I’m curious, as the field of Graphic Medicine gains interest in academia and the general public, how this history (and propensity) will be impacted.

It’s not medically themed, but this one has always been a favorite. 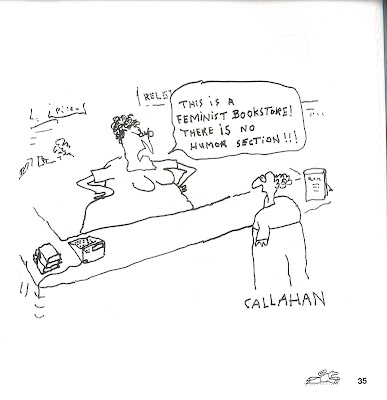 Check out Callahan’s site for more of his work.

One thought on “Callahan”