Yesterday I was in a resale shop and came across a small collection of Girl Scout badges. 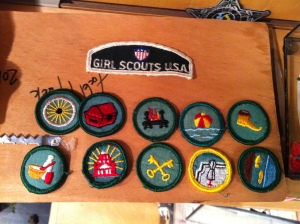 I found them quite graphically appealing,  but  they also struck this strong chord with me, a memory chord. I was a Girl Scout. I must have earned some badges. It disturbed me to realize I remembered absolutely NOTHING from this period in my life.

My college friend Kelli remembers everything. I’m so envious because I seem to remember so little. I love reading (and almost living vicariously through) memoir in which the creator vividly describe details from their childhood, like Roger Ebert’s Life Itself, or Ellen Forney’s Monkey Food: I Was Seven in ’75.

So I did two things. I turned to my personal historic record and discovered my Girl Scout handbook, which had a few clues, like which badges I actually earned, and I immediately felt the urge to illustrate them. They mostly describe me today. I may not remember much, but at least there is some consistency. 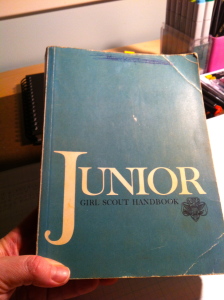 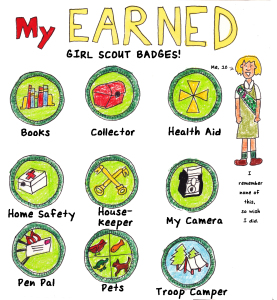 I still longed to know more, so I did what we can do in 2012, I turned to Facebook. My fellow Girl Scout troop members are there. MariAnn told me that I likely got my collector badge for Pet Rocks and that her mom was our Brownie troop leader. Ronnie told me that at camp we had our flashlights taken away by a very mean counselor because we tried to find our way to the outhouse in the pitch black night. It’s not much, but more than I had before. Facebook as collective memory. I like it. Ruth even went so far as to dig up this photo of half our troop. 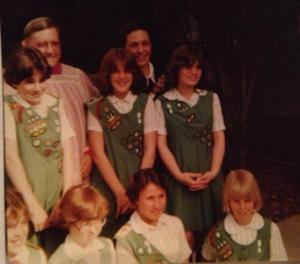 As I was coloring my badges it struck me why this Girl Scouts thing is so resonant right now. I’m struggling to explain to myself why it is so terribly important for me to write  and draw a book about the AIDS unit where I worked as a nurse for six years in my  thirties. There are clear parallels.

Those badges and Ruth’s photo of my 1977 Girls Scout troop made me realize that Girl Scouts was an important group to me, as corny as that sounds. I was partly formed there.

I was also partly formed on Unit 371. I earned more than one badge in that place, I am certain. And 35 years from then, when I am 65, I want to remember more of that place than I do of my Girl Scout troop. Who knows if Facebook will be there for me then.