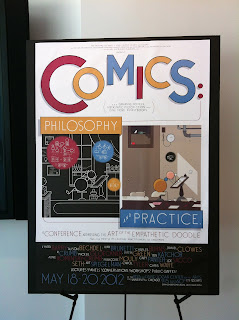 A historically unprecedented gathering of major American graphic novel artists took place at the University of Chicago this past weekend. It was organized by academic Hilary Chute, author of Graphic Women and Art Spiegelman’s editor on MetaMaus. The conference was live broadcast on Facebook, and the talks will be archived on the site linked above.

The opening event was a Q and A with Art Spiegelman titled, “What the %$#! Happened to Comics?” 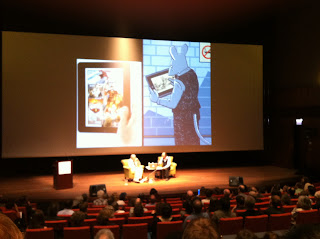 WJT Michell talks with Art Spiegelman
Spiegelman struggled with the interface for the overhead images, embodying one sub-theme of the weekend’s conference. Cartoonists on several panels talked about the transition from pen and ink to computer-based work. Most expressed that both continue to have great importance and possibility for the art form. Look to Justin Green’s well constructed comments on this in my next post.  In another interesting twist on the virtual vs. actual, after giving up on the overhead images, Spiegelman sat back and puffed on his electronic cigarette. This was particularly entertaining to watch while the two men discussed Foucault’s comments on Magritte’s This is Not a Pipe.
In his comments, he referred to the “chicken fat” notion in comics. Definition here per Will Elder of Mad, taken from this blog post after his death:

“The term just came out of what we both [Kurtzman and Elder] knew were the parts of the strip that gave it more flavor but did very little to advance the storyline. That’s what Chicken Fat does… it advances the flavor of the soup and, as we all know now, too much chicken fat will kill you!”

Random Spiegelman quotes:
Mad Magazine ruined my life! It’s where I learned everything!

Librarians are the best friends comics have.

It’s important in comics to have a vulgar/gentile tension.

Books allow us focus in a fast-paced world.

On using comics in the classroom: Leave comics alive enough so people can rebel against them.

If children like something, adults get nervous and try to control it.

I found the most memorable Spiegelman quote from this conversation was, if I’m recalling correctly, in response to a question on modern technology and the use of imagery:

“Beauty and ugliness are such a stew at this point.” 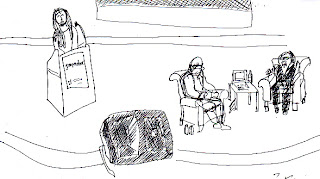