Saturday continued to be an amazing day of presentations. I had to leave the conference, but was able to watch the panels through a live feed on Facebook. This was a great experience too, participating in the tweeting and online excitement.

Unfortunately I missed Joe Sacco’s presentation, but will certainly go back and watch it when the archive goes online.
I did listen to the panel “Graphic Novel Forms Today” featuring Charles Burns, Dan Clowes, Seth, and Chris Ware. Be sure to watch it if you have any interest in graphic novels at all.  Chris Ware had a tremendous quote, “Books are an incredible metaphor for a person. They have a spine and they are bigger on the inside than the outside.”
Francoise Mouly gave a terrific presentation on her new book, Blown Covers. (Which is also apparently a blog!)
The day closed with Alison Bechdel and Hillary Chute in conversation.
Sunday morning I returned to the conference to see the “Lines on Paper” panel. 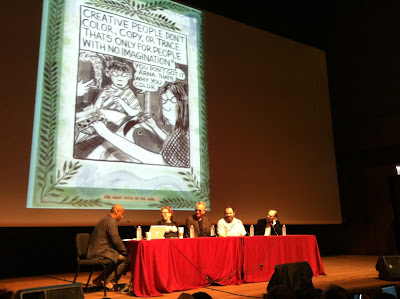 L to R, Hamza Walker of the Renaissance Society of the University of Chicago talking with Lynda Barry, Gary Panter, Ivan Brunetti, and R. Crumb.
Since I’d seen the quality of the online presentation of the conference, and because the words of amazing inspiration were flowing so fast from the mouths of the panelists I could not keep up, I decided to rely on a re-watching of the panel for capturing quotes. Lynda Barry truly is an amazing entertainer. I plan to update this blog post with quotes once they are available online. This freed me to enjoy the words, follow the flow, and have a bit less of a mess in my panel sketch. 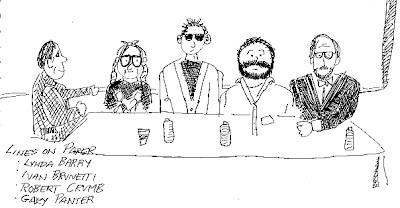 I had seen Lynda Barry in the lobby before the panel, chatting with Liz Mason of Quimby’s, but couldn’t muster the courage to speak with her. 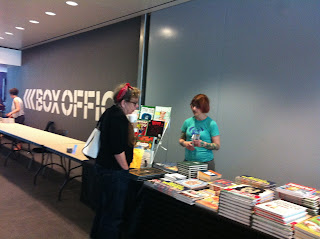 Fan drooling was discouraged at this mostly serious event, so I needed to have a good question with which to approach Lynda, should I find the courage. I decided it would be to ask if she was comfortable with people adapting her teaching exercises from What It Is for their own educational purposes, or if she really only intended for them to be used by students of comics.
Of all the conference participants, Lynda Barry has the most resonance with my personal history and life as a cartoonist/artist. In the summers of my college years, my brother and I would wait at the local record store for the Chicago Reader to be delivered so we could frantically flip through the pages to find “Ernie Pook’s Comeek” and Matt Groening’s “Life in Hell” every Thursday. (The rest of the year I was doing so at the Loyola el stop with friends.) Lynda’s work taught me that comics could be about troubled families and insecurities and I loved her narrative style above all others. I fell in love with comics through her work, which led me to Spiegelman’s Maus and every other intelligent, serious comic I have since read. Lynda’s work also led me, while working as an AIDS nurse years later, to consider making a comic to help me deal with the devastation I was watching around me.
After the amazing panel, more inspired than ever, I finally had the opportunity and seized it. I politely said, “Excuse me…” to Lynda Barry before the next presentation started and asked my question.
Her answer was amazingly generous and kind, “Of course! It’s there to be shared! I always say that you can’t steal any idea from me because I still have it.” She said her whole curriculum is online at her tumblr to be used. I mentioned that I was teaching her work at Northwestern Medical School. She said, “There’s this doctor at Penn State who teaches comics to medical students too!”
And we were off. I told her that was Michael Green, our colleague in Graphic Medicine. She said she was particularly excited about the convergence of comics and medicine, so excited she was literally shaking. (I’m not using that word as an expression. Anyone who talked with Lynda Barry may be able to confirm or deny this, but she trembles with excitement, or at least she did at this conference.)
She said that she was really into neurology right now, and that she’s working with a doctor at UW Madison, trying to convince him to use his functional MRI to scan someone while they read a comic book, so we can literally watch the brain light up. This reminded me of Ian Williams’ illustration from his article “Autography as Auto-Therapy: Psychic Pain and the Graphic Memoir” in the Journal of Medical Humanities: 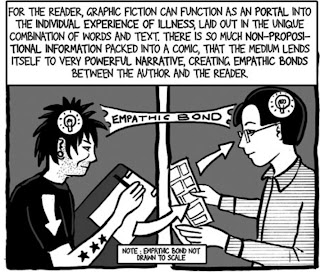 The lights were dimming for the next presentation, so we had to cut our chat short. I was able to give her a flyer for our Toronto conference.
Mind completely blown, I walked into the hallway, realizing that I was now trembling and about to burst into tears. Barry had described in the preceding panel the moment when she first met Jeff Keane, the cartoonist son of Bill Keane, creator of Family Circus. She was a sniffling, bawling, barrel of mess when she met him, because his work had meant so much to her as a kid. He had meant to her what she means to me. Luckily I was able to hold myself together until just after I walked away from Lynda.
And that’s my report. For now. It will take me quite a while to fully process the importance of the Chicago Comics Summit, and I suspect I am not alone in that
sentiment.