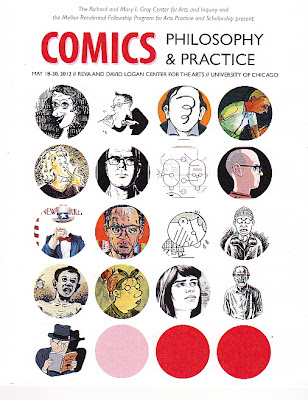 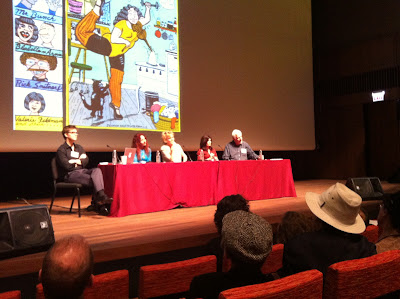 This panel was quite inspiring. (As was my seat. In the photo above, the audience row in front of me is left to right: Chris Ware, R. Crumb, and Art Spiegelman. To my right was Alison Bechdel.)

I wasn’t certain if the webcast of panels would be archived for later viewing, so I was furiously capturing quotes around my sketch of this panel. Here’s what that mess ended up looking like: 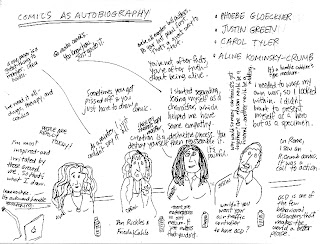 When I got home, I transcribed what I caught, organized by speaker.

My friends went to Vietnam. I had survivor guilt. I had to wage my own war, so I looked within. I didn’t want to present myself as a hero but as a specimen.

In Rome, I saw an R.Crumb comic. It was a call to action.

On computers and comics: I was thinking, why would so many cartoonists get together? One reason would be a funeral…you can’t get (certain inks) anymore… the other reason would be a marriage. Computers give unlimited powers to your mind.

OCD is one of the few behavioral disorders that makes the world a better place… Wouldn’t you want your air traffic controller to have OCD? Your pharmacist?

Comics is a humbler cobbler’s type medium…. we are all master bullshitters… Do your last panel first. That’s a great way to start.

I started separating, seeing myself as a character, which helped me to have some empathy for myself.

Creation is a destructive process. You destroy yourself. Then you reassemble. It’s painful.

You’re not after facts, you’re after truth, about being alive.

I have my students copy the masters… I lead my students to the books. Then I say, go make comics. You know how. Just go do it.

There are masterpieces in any medium. Even blogs. It just matters that you do it.

As a painter, I just couldn’t say it all. So I made comics.

Sometimes you get pissed off & you just have to draw a comic.

(paraphrasing here – need to rewatch for proper quote) I’ve just been through one of the worst eight months of my life. My mother was sick and died. But every night I knew I could go back to my drawing table and find my solace. (She chokes up, as do I.)

A one-pager is a great thing to master. Like a haiku.

We need it all… drugs, therapy, and comics.

I’m most inspired and irritated by those around me. So that’s what I draw.

I have no style. It’s awkward, horrible scratching. 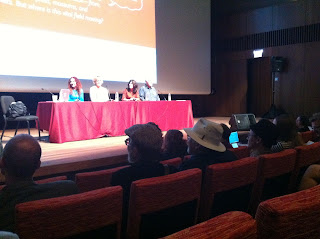