Cartoon is done and will post later today. I hope it was worth a week’s wait. You’ll let me know.

Cindy managed, in the steadfast manner than is her hallmark, to get us two tickets to Friday night’s performance of Billy Crystal‘s 700 Sundays. It was incredible. His boundless energy through almost 3 hours of show – for all these months of performance – is beyond comprehension. He shares amazing stories about his connection to legendary Jazz performers through his family ownership of Commodore Records. For example, the first movie he saw was Shane, and he watched it sitting in Billy Holiday’s lap (when young Joey shouted at the end “Come back! Shane! Come back!, Holiday whispered in young Billy’s ear, “He ain’t comin’ back.”) One wonderful thing about Crystal is that he tells stories like this not to impress us, but to humbly share the awe with which he holds these memories. Because of this, we end up feeling like these are our memories now too. This holds up not for just the Jazz icons who populated his childhood, but for Crystal’s own relatives, including both his parents, his uncles, his grandparents, and chain-smoking, Florida-retiree Aunt Sheila. Billy channels her in a touching segment to tell the story of how she and her husband came to accept their gay daughter, eventually dancing to “Sunrise, Sunset” at her ‘Lesbeterian’ wedding. 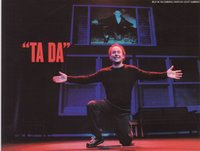 Crystal is not just very funny, he has long been the master of making you laugh and cry at the same time without feeling as if you are being manipulated. Ever since Mr. Saturday Night, I have thought of this as a much higher art form than being able to do either separately. The key to not manipulating an audience seems to be in the difficult task of sharing honest emotion, not what would be scripted for one to feel in a movie verision of life. Crystal takes this challenging path through his own history, culminating in the second act, where he shares the death of both of his parents, his father when he is 15 and his mother when he is in his 50’s. Beyond the melodrama of these stories and the ‘boulder’ of grief he describes carrying through adolescence and young adulthood, he shares his ultimate philosophy of coping – in two wonderful scenes in which he confronts God. In the second, he picks up the cards he has been dealt in life, one by one, painful and joyful, and makes each of us want to look at our own lives in this way. The book version of 700 Sundays was recently released and would make a great gift this holiday season.