In Washington DC for the American Society of Bioethics and Humanities (ASBH) annual meeting. This morning’s adventure was a fieldtrip to Bethesda, Maryland to the National Library of Medicine.

An early morning bus ride afforded us lovely sunrise views of the Potomac. 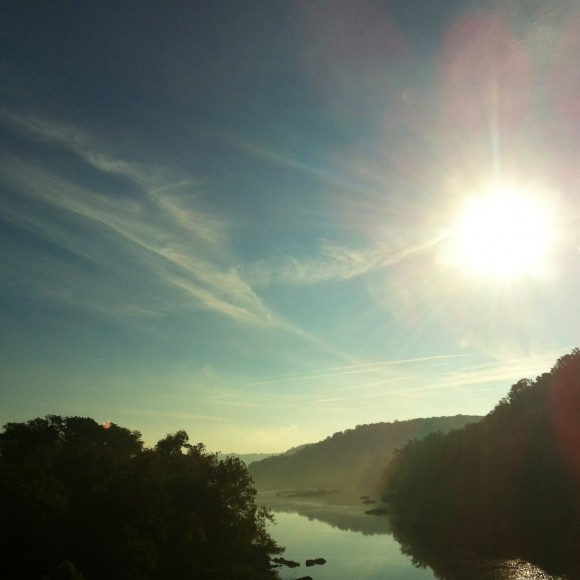 The NLM is one side of a giant compound that includes the National Institute of Health, and security is tight. We were all screened airport-style in a special anteroom. From there we proceeded to the library, which is open to the properly screened public. 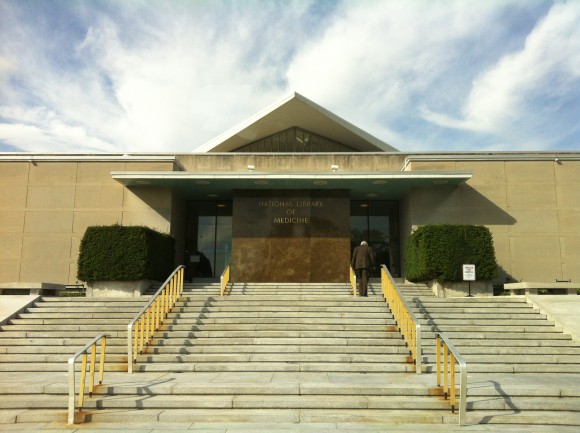 According to our guide, the very enthusiastic and knowledgeable historian of medicine Steve Greenberg, the building’s walls are two-foot concrete and the majority of the collection is four floors underground, as it was built during the Cold War. 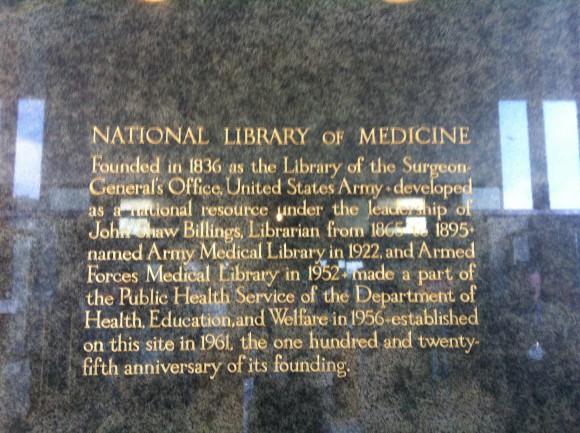 We spent most of our time in the large reference room. 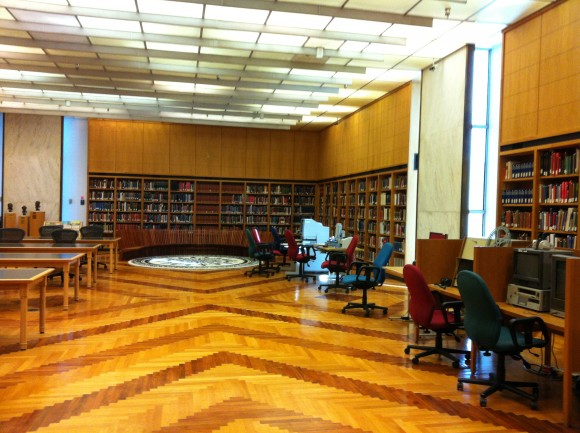 The circular rug at the far end was chosen because the patterns vaguely represent a caduceus.

After a discussion around the rug of what the NLM does and doesn’t have in its collection (Fun thing in the collection: cigarette lighters that the National College of Surgeons gave to their members at annual meetings during the 40’s and 50’s. Not in the collection: the medical records of President Garfield. Those are in the National Archive with all the others.)

I did take this opportunity to ask after the Graphic Medicine collection in the NLM. Steve reports that at this point their collection is limited to mostly educational comics, specifically around AIDS and the military, but they hope to improve on that soon with all those “graphic novellas” out there. Yes! Steve in the National Library of Medicine knows that Graphic Medicine is on the rise!

We were then taken into the specially refrigerated anteroom (that has a cool name but I missed it taking photos of that awesome parquet floor above.) We were then shown some of the highlights of the archive. First, a highly decorated 12th Century medical recipe book. In Latin. It is suspected that this book was not used so much as given as a gift. The text is impossibly small and the dark squares you see on the pages are gold leaf inlay. The binding is embossed leather. 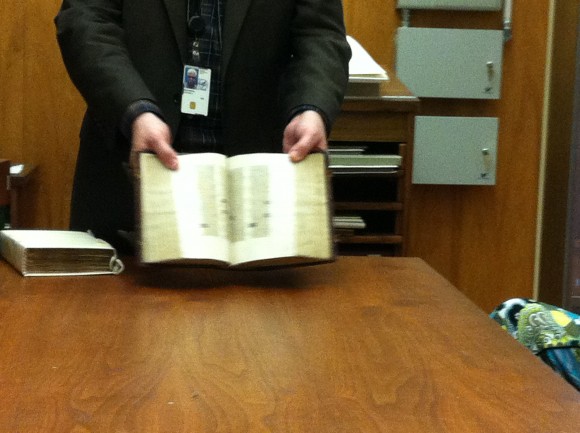 The next text was a rebound treasure with a great story. Rebound – it’s a brilliant pun. Read on and you’ll get it! 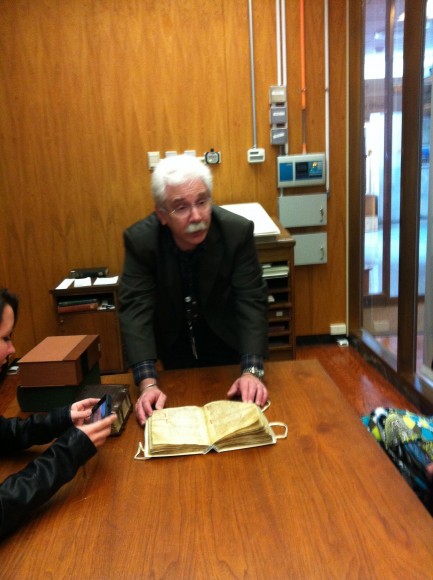 Steve is showing us here a working version of the decorative text above, worn from use as a medicinal cookbook. Lots of tinctures of mercury apparently. Sometime in the 1800’s, a Doctor General working in the NLM (when it used to be where the Hirschorn is now) did not get along with some other Doctor Major. Doctor General fired Doctor Major. And Doctor Major, legend has it, took this book as his “retirement gift” (my words).

Twenty or so years ago, a bookseller approached the NLM offering this book for sale to them, not knowing the story above. The NLM didn’t recognize it as its own, and passed on the purchase as the price was too high ($150,000).  The Wellcome Collection did buy the book, and in researching its provenance, discovered that the book was once catalogued in the collection of the NLM. Hilarity ensued. It was rebound (see? my pun!) and Steve reports that the library staff had a party on its return. With period costumes. Library people rock.

Our last two treasures were original documents. The first was the taped-together sloppy sketch notes of Marshall Nirenberg, the biochemist who won the 1968 Nobel Prize for deciphering genetic code – on this piece of paper! I know you can’t see much, but take my word for it, this is cool. 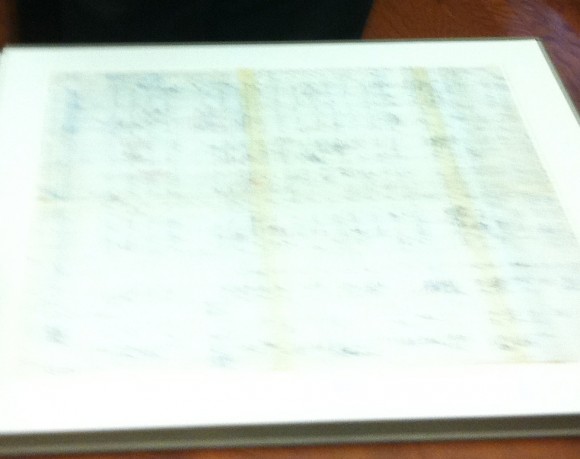 Steve said it is an archivist’s nightmare though because the ink is bleeding & fading and the tape is falling apart but can’t be removed because Nirenberg wrote on the tape.

Last item of the day was this letter. 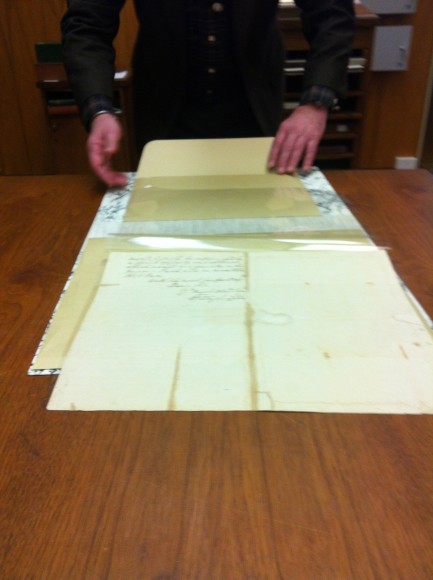 The content of the letter can be summed up thusly:

I am writing to highly commend and recommend Doctor Somebody Else for promotion.

You might recall from my History of American Medicine comic, George Washington did not have the greatest outcomes from his doctors, but so was the medicine of his time. This might have been a reference book they used, no doubt similar in content to the one we saw from the 1100’s above. 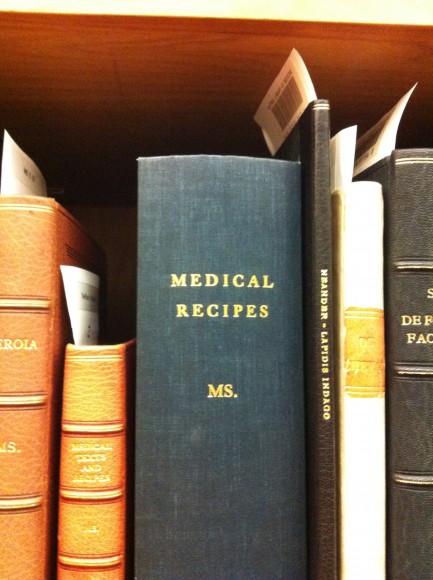