This week a firefighter is the guest reader for Sit Stay Read.

Officer Lesher is a real natural with the kids. She coincidentally also turns out to be a dog lover. In fact, her now deceased beloved dog Pepper, is featured in the book The Firefighter’s Best Friend: Lives and Legends of Chicago Firehouse Dogs by Trevor and Drew Orsinger, published by Lake Claremont Press. 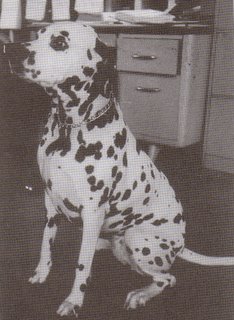 “During the 1990’s, Pamela Lesher was a paramedic on Ambulance 19, which made its home at Engine 28’s quarters. Lesher came to the house in 1996 and met the only other female, Pepper, a seasoned seven-year-old Dalmatian. As is typical with many firedogs, someone who was moving out of the city gave Pepper to the house. Lesher and Pepper hit it off immediately, and the paramedic fondly recalled that the dog ‘slept in my bed and would sit and wait where the ambulance was parked when we went out on a run. ‘ Not only a friend to all the firefighters stationed at Engine 28, Pepper frequently visited the neighbors’ houses where she was lavished with food and affection. Others came by to take a look at her scrapbook and the blue ribbons, which she earned as a show dog before signing up with the department. “
(pg. 126)