Today I was the guest reader in Sit Stay Read‘s new curriculum addition that brings people in professions to read a book to the kids that features their profession and a dog. My book is Badly Drawn Dog by Emma Dodson. It stars a badly drawn dog and a temperamental but cooperative artist – characters I know well. 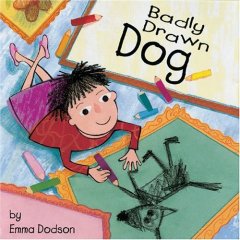 It is a charming book about a dog who wants an extreme makeover, for all the reasons anyone gives for such an endeavor. He goes to a famous artist who remakes him three times, each in a style of artistic note. The first is as a cubist Picasso dog. Imagine this lady as a dog, but blue.

That doesn’t quite work for Badly Drawn Dog. Moments out of the artist’s studio, he crashes into a lightpost because his eyes are so screwed up and his too-angular and sharp toes pop the kids’ ball at the playground. He goes back to the artist. He is remade as a Van Gogh. Think cross between wheat fields and Starry Night, only all yellow, like the moon below. 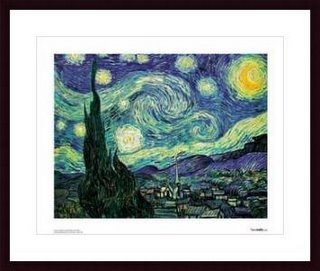 This won’t work for Badly Drawn Dog because he is blinding to anyone who wants to look at him, specifically Doodle the Poodle, his best friend and confidante. Back to the bad drawing board, Badly Drawn Dog.

The artist is not happy to see (the dog formerly know as) Badly Drawn Dog walk back into his studio requesting a third revision. We artists hate being asked to revise. It’s just not in our gameplan. That’s why I like drawing more than writing: less editing. I hate editing.

The artist complies, though, and makes him into a dog that is “very popular.” This dog is a cross between a Wegmanesque outline with Roy Lichtenstein inspired bright polkadots. This is my favorite incarnation of Badly Drawn Dog because it takes a riff on not just populist art, to which I greatly aspire, but on being just like everyone else, and how that’s not a good thing, necessarily. Not that I don’t love yellow labs and golden retrievers, some of my best friends are yellow labs and golden retrievers, but variety is the spice of life, remember. I hear chocolate is the new yellow. Sigh. And I know, I know, it’s not like Alice is a hairless Mexican crested or anything, but still. Badly Drawn Dog sees 13 dogs that look like him on the way to his house, where Doodle the Poodle tells him he just saw 10 dogs that look just like him. But Doodle is our hero here when he suggests that they go back to the little girl who first drew him, all scribbly around the eyes, like a big patch of soot. Cuddly soot that is, and he is transformed back into his sooty badly drawn self. And we say hooray. The End.

I went to Manierre School on Hudson, across from the Marshall Field Homes, down the street from where Cabrini used to be. Now there is a Dominicks and a Starbucks and about, oh, five million condos between the school and the very attractive park that occupies part of the former Cabrini land.

Manierre is an impressive school. The hallways are clean and organized. The lockers are newly painted blue and decorated neatly. The kids are quiet as they walk down the hallway between classrooms. As I proceeded with my book reading I learned that not just the school is impressive, the kids are too. They listened intently. They asked good questions, like, “why don’t you just use markers?” and “how’d you do that?” Those really were good questions because they launched me into explaining concepts like technique, computer colorization, and the limits of certain media. And they cared about the answers, not just making a silly remark. Although silly remarks were welcomed. I read the book to the kids, showing them the pictures as I turned the pages. When I finished, we talked about the book for a little while. Their comprehension of the somewhat challenging storyline was impressive. Then we launched into an exercise that excited me so much that I may be addicted. That’s right, just one hit and I’m hooked. We drew together. Well, I drew. They told me what to do. I only told them that we were going to draw a dog. The following dialogue took place with my hand furiously scribbling in Sharpie on oversized paper:

me: what kind of dog is it?

me: Okay, it’s a crossbreed. A wolf dog poodle dalmation.
(Everyone seemed satisfied with this answer.)

me: what is the dog doing?

kids: in his doghouse.

“Max” a shy boy said with seriousness and certainty.

I stopped talking and just drew. They called out additions as I went, their creativity bursting forth with utter and complete confidence:

I was euphoric. I now completely, viscerally, not just intellectually, understand why Keith Haring so loved and sought out making art with kids. It is a communion of uncensored creative life force. It feels like pure light – a light in which everyone shines.

And now, presenting a colorized re-creation of Max, the art and flower loving poodle dalmation wolf dog, in his home, eating dinner. In keeping with the book theme, he’s kinda badly drawn himself. 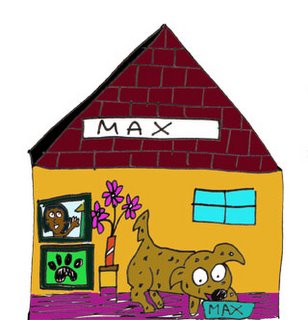 Isaac Stern said in an interview shortly before his death, “If you can find your sense of humility and divinity at the same time then you are beginning – just beginning – to become an artist.”

One thought on “Guest Reader”