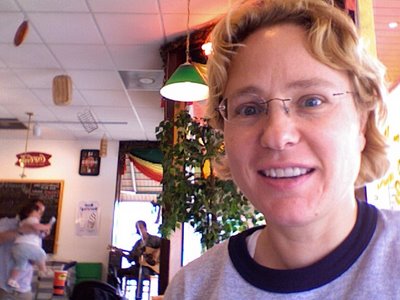 My feelings about not making cartoons have changed. I’ve had some new ideas and I’m getting restless and crabby about not drawing. That’s a good thing. So I’ll draw. Still working on the book, which I suspect I’ll be saying for quite some time to come. I’m writing on a new Mac Book Pro, which will require the rest of my summer break to master. But I think good things will result.
Here’s one now – it has a built in camera, so I can share my current scene – a neighborhood sandwich shop with a folk singer.

Today’s Sun Times has a piece by Cathleen Falsani about Tom Robbins and Siddhartha. (http://www.suntimes.com/output/falsani/cst-nws-fals21.html)

Robbins is going blind and can’t write anymore. He talks about dealing with it:

“He jokes. That’s Robbins’ way. Last year when we had a long discussion about faith and spirituality — his, mine, ours — he told me, “We live in hell because we take ourselves too seriously.”

I know he doesn’t believe that wisdom can be passed on — one has to find it for oneself — but still, that’s pretty good advice.

“When people ask me for advice — and I don’t know why they’re so foolish as to do so, but some people do — I say, ‘Every morning look in your bathroom mirror and say three times: “It’s not about me.”‘

“And when you come to the point where you don’t have to say that any more, where that is so ingrained in you that you just gaze in the mirror and you don’t have to say it to know it, at that point you can start saying, ‘It’s all about me.’ Because it is,” he said, laughing. “Because it’s all about you and me and everybody else on a non-ego level. Because there is only one us, ya know?”

That’s the kind of wisdom that you can see better with your spirit than with your eyes. Even if your vision is perfect.

Grace for the journey, Mr. Robbins.”

One thought on “Hiatus Part Two”