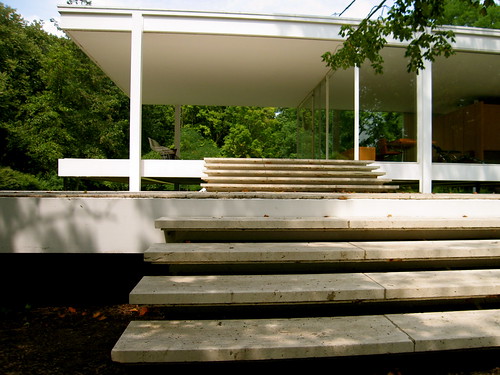 Dan over at Infospigot did some great research on Edith Farnsworth, her vacation house, and her relationship with the architect. He points us to the book Women and The Making of the Modern House: A Social and Architectural History by Alice Friedman for more info.

Farnsworth is sort of an enigma from the little bit you easily find. On one hand, she was cultured, a true devotee of Italian culture. She was an artist. She was learned and capable. Her intellect was razor sharp. On the other hand, she appears to be something of a reactionary. Her public indictment of Mies van der Rohe, which seems to have been summarized in a 1953 article in House Beautiful that she had a hand in, eventually came down to the charge that his philosophy and work was intellectually dishonest to the point that it posed a threat to American values. Note that this accusation was made at the height of the McCarthy era. Note, too, her possibly close ties the Tribune’s McCormick, an anti-communist of the first order. And also: the intriguing fact she spent a long time in Italy as a young woman. What was happening in Italy then? Mussolini–at a time when he was seen in the West as an effective antidote to the Reds (though it must be added that the Tribune, anyway, was critical of Mussolini and his tactics from an early point; the Trib correspondent in Italy, George Seldes, had to flee for his life after the Tribune published his stories accusing Mussolini and his party of murdering opponents). Anyway, you wonder whether mixed in with all her wonderful accomplishments and abilities was a less admirable strain of anti-communism that made her willing to insinuate publicly that Mies was a communist at a time when that charge was particularly damaging in the United States (Mies had been accused of the same thing in Germany before leaving there).

And here’s one more addition to the file, from a 1989 Art Institute oral history interview with Werner Buch, a Mies associate. He addresses some of the issues around the Farnsworth House He more or less confirms that the gossip among Mies partisans attributed the Farnsworth lawsuit as the revenge of a woman scorned:

Buch: There was much discussion of the Farnsworth house. I have developed an image of it from accounts in Architectural Forum and House Beautiful, no less, and from accounts and discussions with friends. Anyway, that’s all many years ago. Essentially, aside from the cost overruns, the Farnsworth house discussion focused on certain use restrictions and environmental control, which were of a technical nature.

Dresel: Can you reconstruct the matter?

Buch: I’ll try. Among old friends, all more or less like me, no one would admit that one can’t live year-round in that house. Moreover, “Werner, forget it, that had nothing to do with technology.” “It does,” I said. “Edith complained, sued.” There was a court date. Mies stood around awkwardly and stone-like, said nothing, and felt ill. One could feel that in all the reports. Mrs. Farnsworth was asked, “Why did you have this house built?” She, “I wanted to have something special.” “What did you imagine?” “I don’t know, it was just to be special.” Doesn’t sound too unrealistic. Whereupon she probably continued, “And then I noticed it’s so hot in the summer that one could hardly be inside, and so cold in the winter.” The old Mies friends, “Forget it, Werner, that was never the reason.” They didn’t want to hear that the house had drawbacks, especially where it was such a milestone in architecture. With that said, it really isn’t that important whether one sweats or freezes. Then they wound up for the counterpunch, “Do you know what the problem was? It was Edith! Edith wanted Mies. And only because she wanted him did he get the job. And then, later, when he would not marry her, she got mad and hit back.” John Zukowsky, who stepped into the Chicago Mies scene later but with assuredness—I’m reminded of the Mies exhibit at the Art Institute on the occasion of the 100th anniversary—was different, not prejudiced. John sat here at this table and asked, “Tell me, Werner, can you explain to me why that house was ever built? It is in a hole full of mosquitoes, which at times fills up with flood water from the Fox River.” Again, the talk was of environmental difficulties. And that beautiful roofed-over patio could only be used as a sitting place if it were screened in, which would profoundly affect the impression of the house. In the summer of 1978, my wife and I visited the house with George Danforth and returned that evening completely covered with mosquito bites. Yet we still sit here today with our photos, completely transfixed by memories of that beautiful day.

One thought on “Last thing on the Farnsworth House for Now”