Just back from New York. and an inspiring symposium sponsored by Columbia University. 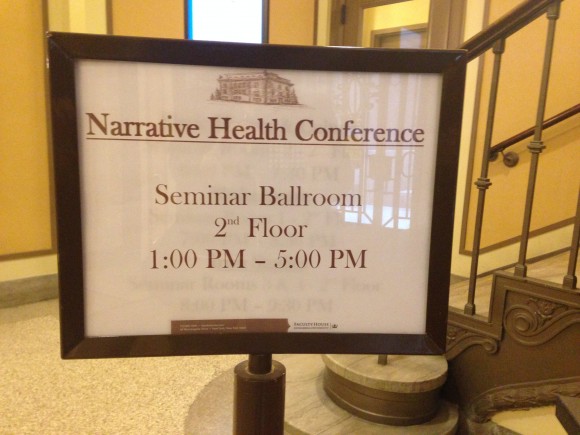 The goal of the half-day event, Out of the Frame, was to explore, according to co-organizer Marsha Hurst,

“how we can connect personal experience and social issues in graphic health narratives.”

A few moments in the door I met the lovely John Jennison of DoGooder Comics and my co-presenter, comics journalist and activist Seth Tobocman, editor the World War III Illustrated collection. Was also able to quickly reconnect with a few pals from the Narrative Medicine program and hear about their amazing community outreach work. Also had the opportunity to meet Matt Friedman, an artist whose new cancer treatment memoir, Relatively Indolent but Restless, is already on my night table at home next in line to be read.

The symposium began with two presentations, mine and Seth’s. Here is a real-time comic rendering by the amazing Connie Sun. A highlight of my weekend was getting to meet and see her twice (the second time at MoCCA Fest on Sunday). At the front table from the left is Karen Green, Seth Tobocman, and me. 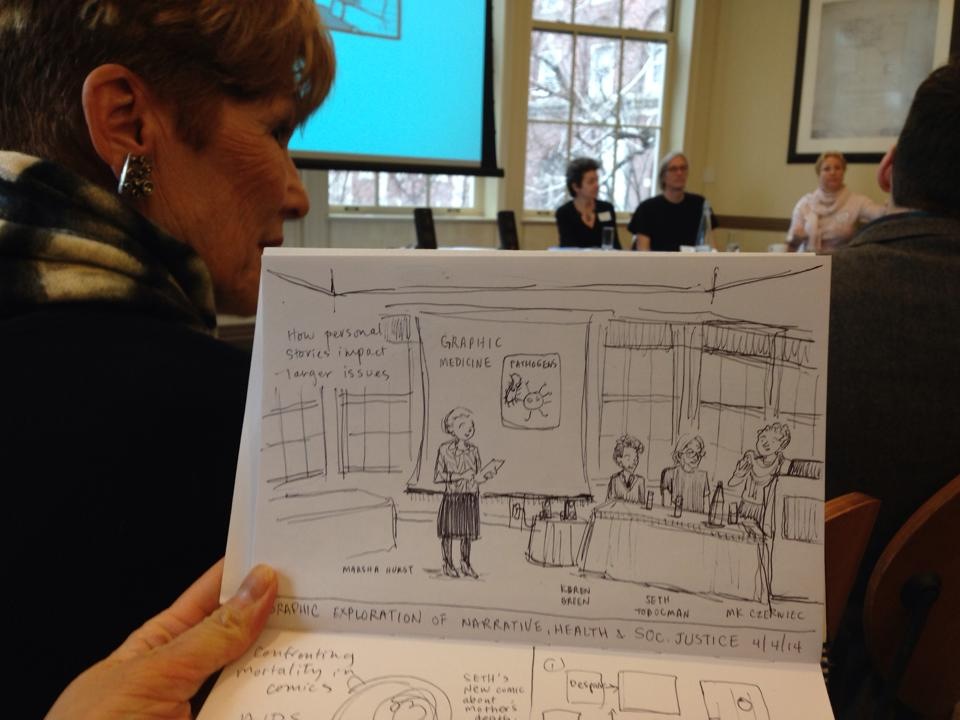 Seth’s introductory talk included a moving performance comic about his mother’s last hours. Columbia librarian and comics archive curator Karen Green then put a question to each of us about how what we teach to our students in comics relates to social activism.

We then broke out into smaller groups for workshop sessions. I led one of the sessions focusing on comics and caregiving. The participants were so interesting, and I enjoyed their introductions best of all, as they showed their crayon self-portrait and talked of the ways in which they are integrating comics into far-reaching work in various health-related areas. We did a writing exercise by Lynda Barry called “Walking Around in an Image” which is to serve as a comic-launching memory exploration. We ran out of time for the comic part, but participants said the writing exercise was particularly helpful in that we explored a memory from the perspective of it as an image that we carry. Here they all are, hard at work. 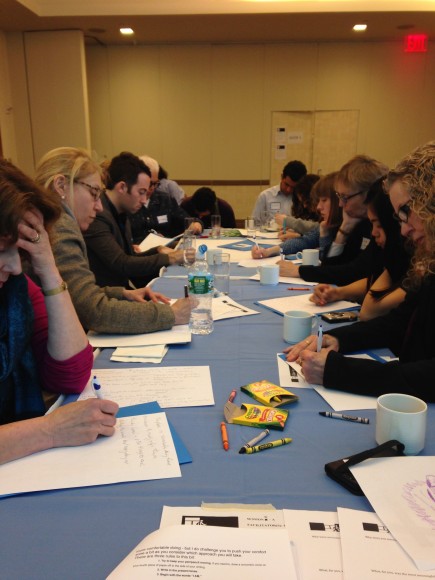 Then groups shifted and I was able to attend a workshop by Samantha Dempsey who is doing some amazing work with making patient experience stories visual, and then using those visualizations to help improve their care experiences.

Our closing address was given by Sayantani DasGupta, who blog readers and my students may remember from her talk, Stories Are Good Medicine.  It was particularly fun, though not good for the lighting in the photo below, to see Sayantani speaking against the backdrop of my two closing comic slides. It wasn’t planned, but I did enjoy the way these two simple images for me summarized comics creation as a personal but also social act. They arose from feedback I was given to presentations last year on comic creation by caregivers. 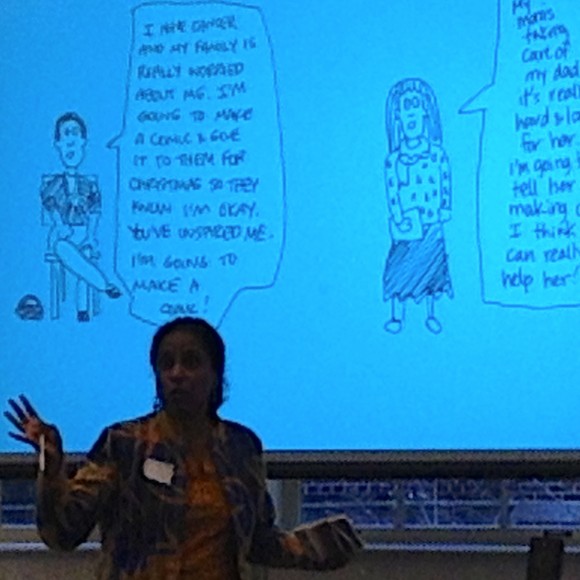 I am very grateful to Marsha, Sayantani, Pat Stanley, Karen Green, and all at Columbia who were kind enough to include me in this symposium. I look forward to working with all of you again in the (hopefully) near future!