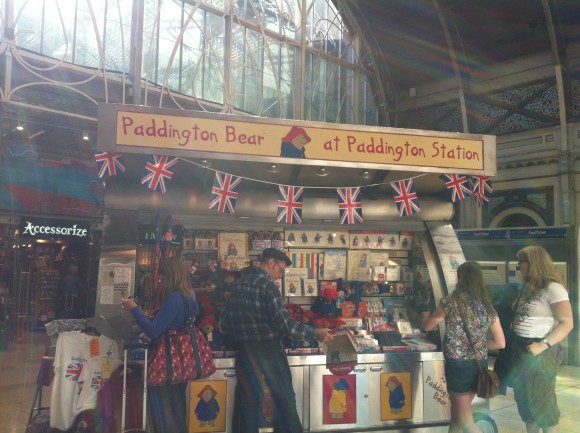 Friday AM I travelled by rail from Paddington Station in London to Oxford. It was quite pleasing to have booked travel in advance on the National Rail website, with the working tickets printing from the self-service station kiosk with ease.  Very efficient. Had extra time to pick up a pop-up map of Oxford, so I could orient myself on the ride over, circling all the critical places that former Oxford scholar and friend Jarmilla suggested required a visit. 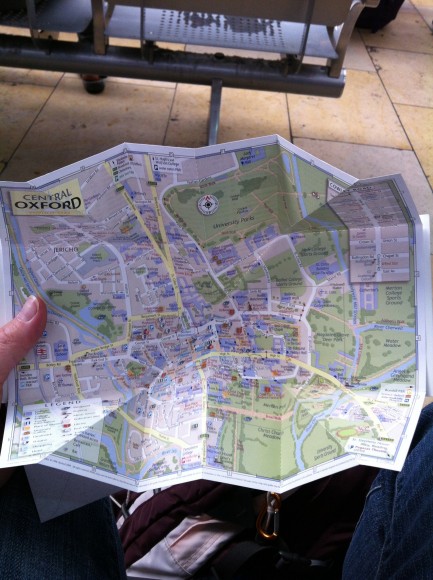 One of the pubs Jarm highlighted was founded in 1242. Twelve forty-two! My colleague Michael, about 6’2″, is anticipating that he won’t be able to stand upright in the place. People were shorter back then, so ceiling height tends to top off around 6′. Whoa. An experience of human history we Americans just don’t have.

I soon stopped mapping and texting to take in the beautiful English countryside – highlighted by the amazing weather we are having. 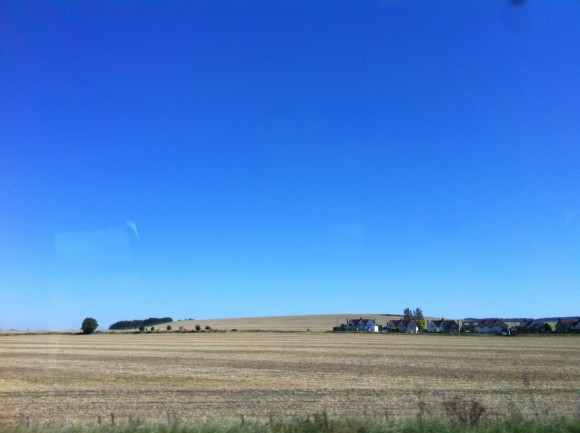 Our conference is at Mansfield College, Oxford. 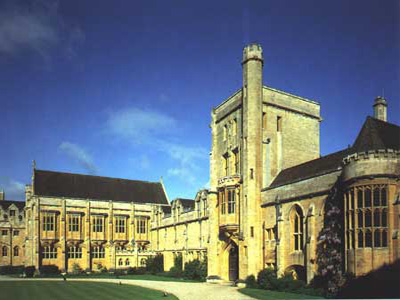 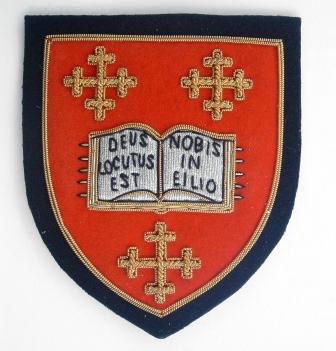 (Note to Graphic Medicine conference pals: I think we need an impressive crest just for our conferences. Let’s get on that.)

The most important lessons I’ve learned thusfar about Oxford are:

1) Never, ever walk on the Quad grass. Ever. (I may or may not have been told that firmly and directly.)

2) Try to keep yourself out of the way at dinner. It’s a small room with many long, long tables and narrow passages. (I may or may not have been reminded of this several times by those attempting to serve food.)

As far as the conference itself, I had grown a bit anxious over the past few days that perhaps I wasn’t sufficiently enough versed in the philosophy of Foucault or that I perhaps didn’t have a firm enough grasp on the phenomenology of phrenology. (I made that last one up, but you see where I’m headed here.) But meeting the fellow participants set my mind at ease. The organization sponsoring the conference states in their introduction that its aim is to,

“bring together people from different areas, backgrounds, and interests to share ideas and explore various discussions which are innovative and exciting… learning and reflection is best conducted through an interactive process which engages in mutual and reciprocal dialogue.”

That all sounds non-threatening, right? The presentations today were thought provoking and interesting, the group conversation after them equally insightful. A sense of ideas bouncing around rather than criticism. Let’s hope that’s still the case tomorrow when Ian, Michael, and I present Graphic Medicine.

A note on accommodations. This is the life of the scholar. And/or perhaps the convent. Shower and bathroom down the hall. 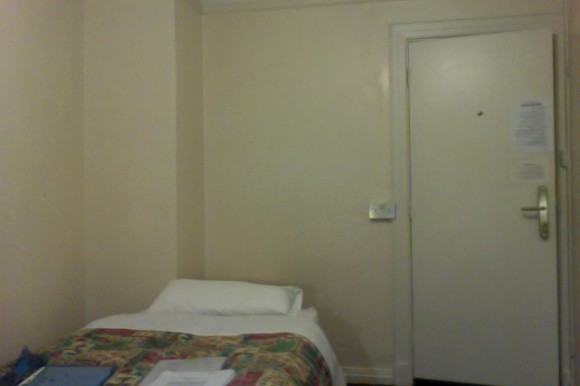 The day started with a down-the-hall shower, which went quite well for down-the-hall showers. Breakfast was served and the conference reconvened. Another day of cultural enlightenment, the highlight of which was a trio of scholars/comics enthusiasts from the Philippines. Many great quotes from this presentation, first of which appears in my notes is, paraphrasing here, “every entity strives to find its own identity to fit in and at the same time set itself apart.”

Michael Green, Ian Williams, and I presented Graphic Medicine over the next session. Michael presented on teaching medical students using comics, I presented on hospice comics, and Ian presented on iconography of illness in graphic narrative. 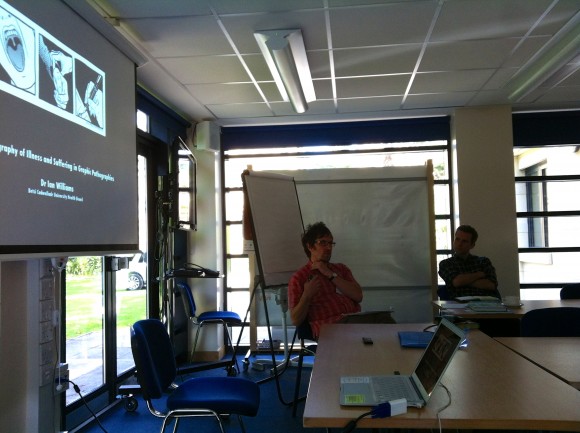 It was a very strong panel that was well received. Michael recorded it and it may perhaps be a Graphic Medicine podcast one day. I’ve come to judge the true measure of conference presentations by when other conference participants, who were not able to hear our talk because of parallel sessions, say later, “I heard that your presentation was really amazing!” That tells me people are talking about it, saying good things, and that means it was successful. The buzz factor.

The remainder of the day was filled with fascinating sessions in which I was enlightened by world perspectives I knew nothing of (who knew there was an internment of women in Norway who had slept with German soldiers after WW2??)  and making new friends.

A group then headed off to dinner at The Mitre. Took a few photos along the walk. This is the Bridge of Sighs. 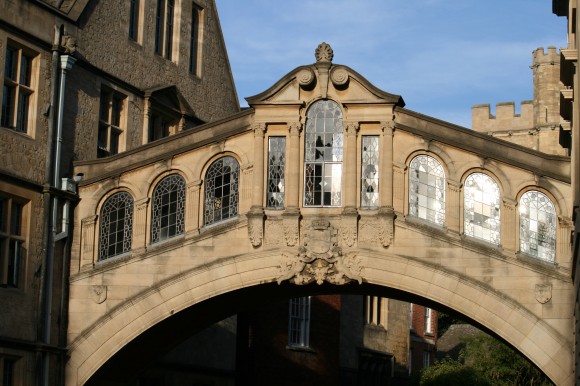 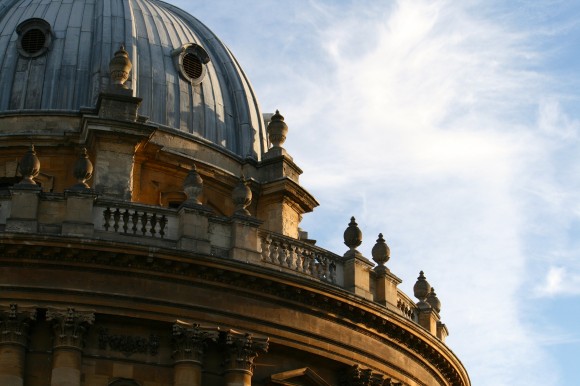 Creepy philosopher head. Several of these surround a building next to the Rotunda. 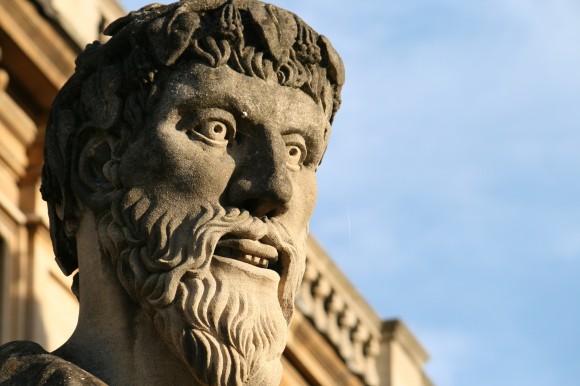 And our dinner group, minus one colleague who had to run back to get ready to present the following day. Countries represented below: England, Wales, Norway, the Philippines, the US, and Spain. The dedicated pal who ran off would have added Poland. 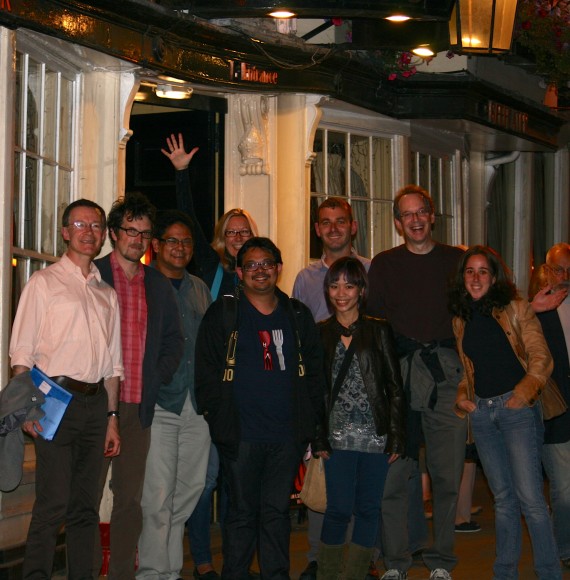 After dinner we found the 1242-founded Bear Pub recommended by Jarm and were grateful they had an outdoor garden on this lovely night. We all raised a pint to graphic novels and academia. In that order. 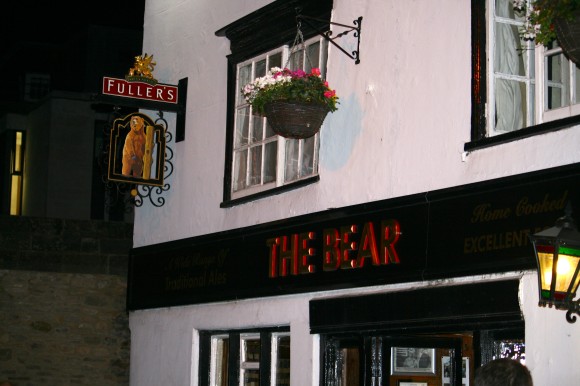 Up and out of the room early, sessions all day. I did manage to sneak away at lunch, which turned out to be a great idea because it was 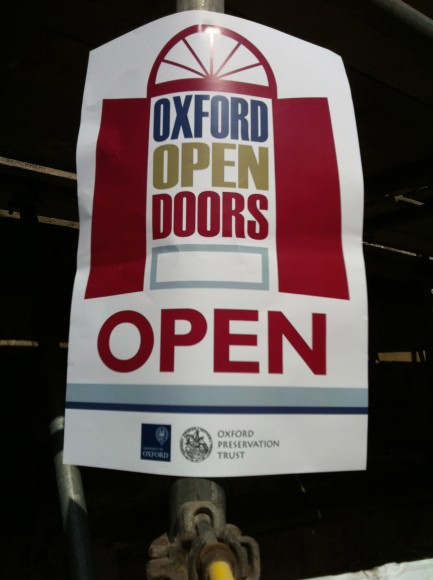 Oxford open doors day! Crowds were heavy on High Street, and navagating them in the one hour I had away from the conference was challenging, but it did afford the opportunity to peek behind the normally locked large brown wooden doors into some of the other colleges. Don’t ask which these are, I was in far too great a hurry. I had souvenirs to purchase from the OFFICIAL Oxford shop! 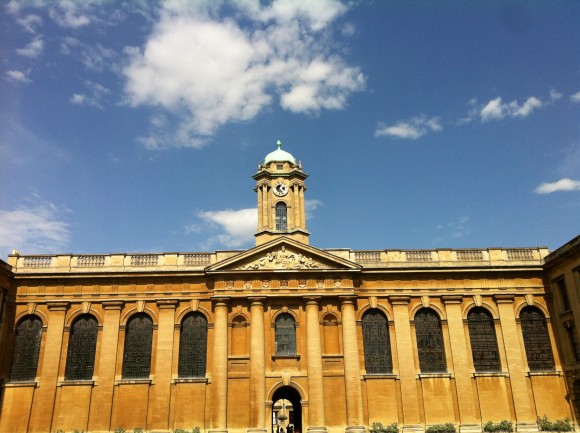 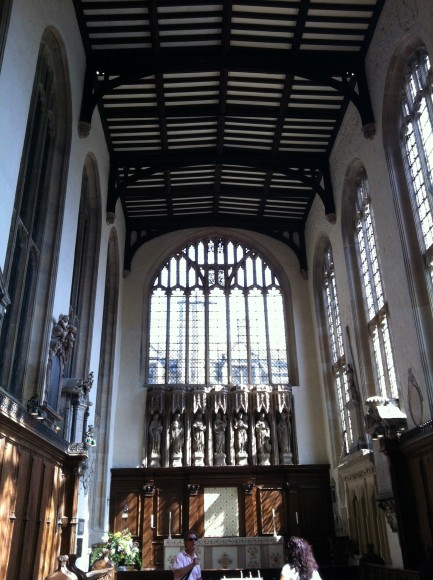 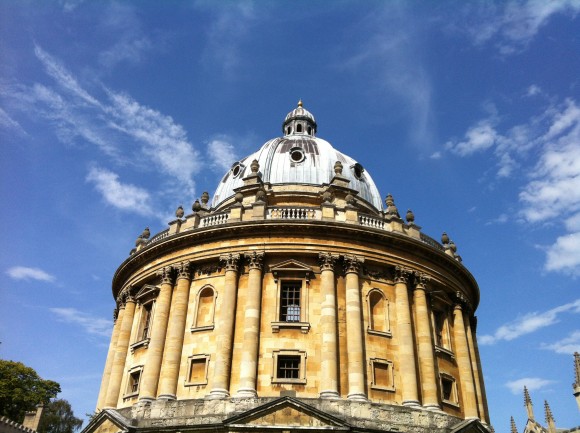 No time to buy or room to pack, so please add these to my holiday gift list. Size 8.5 American. Thanks. 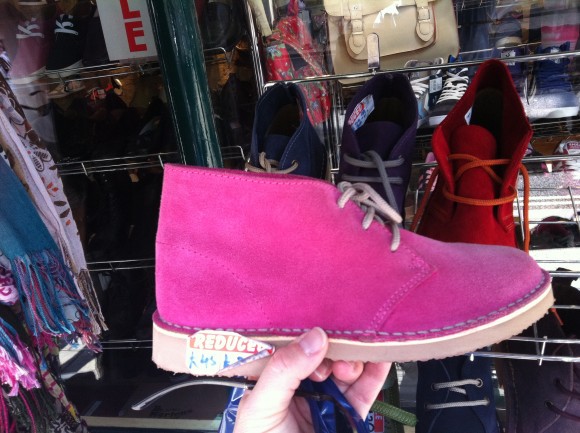 Returned to the conference only two minutes late! Phew. The remainder of the sessions were enlightening. Particularly enjoyed a new pal from Poland, Anna (the dedicated one who did not go to the pub) who presented on Superman as Hemingway-esque code hero. The title alone reflects that she’s smart but also quite amusing and though she knows much in each realm, she isn’t taking academia or comics more seriously than necessary.

Here is a poorly-cobbled panoramic of the room most of our sessions were in.

Upsides of this room: all conference participants could sit in on one session, decent AV but excellent acoustics, table formatting (not rows) allows for good communication and conversation during the Q&A. Downsides of this room: musty smell and chairs designed for a non-human race. They were so bad that a few of us with back problems ended up standing most of the last day.

As the day drew to a close, we were all grateful for a wonderfully productive & enlightening conference. I have about 20 pages of handwritten notes, one side of the page to record ideas presented, the other inspirations and ideas for my own comics project.

If you’d like to see some truly amazing photos of Oxford, check out Michael Greene’s photos here.  One he didn’t post there, but sent me, is this one – me drinking tea & eating biscuits at Oxford. 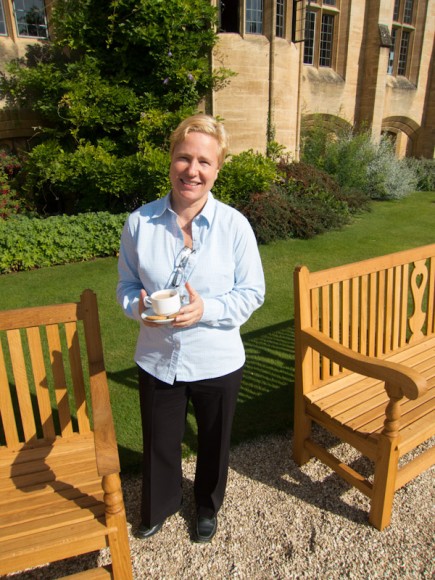 I truly hope to return to Oxford soon. I missed seeing the water, a great modern art gallery, punting, and likely much much more. Perhaps one day I’ll return for the amazing-looking comics festival, Caption. 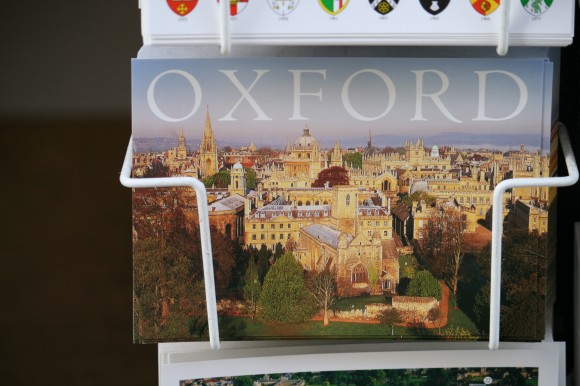 Took the train from Oxford back to London, and settled in at the hotel bar/restaurant in time to watch the closing ceremonies of the Paralympics. It was a pagan steampunk spectacle with awesome music from Coldplay, Rihanna, and Jay Z. Didn’t get to watch it all, but catching up on highlights via the interwebs. This photo tweeted by Stella McCartney last night. 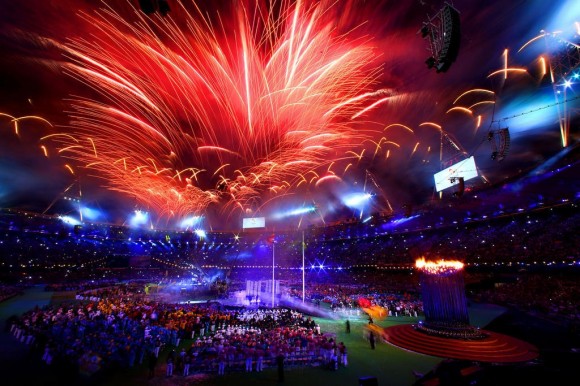 May head down to the victory parade later today…. in London for Laydeez do Comics tonight (interviewing Nicola Streeten for the Graphic Medicine podcast in a few hours!) and then back to Chicago on Tuesday.