I’m always blathering on & on about how we all should draw to communicate, regardless of our comfort level doing so. As brilliant cartoonist Lynda Barry frequently says, pretend we sat a 40 year-old down next to a 4 year-old, and we asked them both to draw. If the 4 year-old refused to draw, we’d worry about that child, about her emotional well being. But if the 40 year-old refused to draw, we wouldn’t be surprised or worried, we’d assume it to be normal.

That makes no sense!

In grade school, we start out drawing to communicate our thoughts, ideas, feelings. Then we are given words. For a while, we combine the two. But then someone, somewhere, be it teacher, fellow student, or ourselves, says, “Suzy/Johnny/Robin are the ‘real artists’ in this class.” So Suzy/Johnny/Robin are allowed to keep drawing, and the rest of us generally use words alone from then on.

We stop drawing. How unfortunate.

And it’s illogical, because there certainly were kids who showed more natural aptitude at writing in those same classes, but the rest of us didn’t stop writing because they were the ‘real writers’ in the class. We had no choice but to learn what it took to write. But we don’t afford drawing the same benefit of the communication doubt.

When I was about 25 I was so frustrated with my inability to fully articulate myself in words alone that I began adding images. Alison Bechdel has talked about this discovery in the intro to The Essential Dykes to Watch Out For. 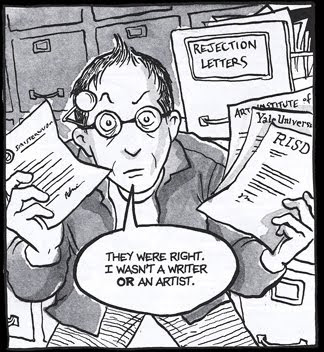 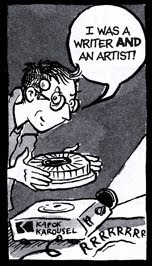 So I’ve been trying this drawing thing, with mixed results, for almost twenty years. Lately my efforts have been far more concentrated – and as I mentioned in a prior blog post, that consistent effort is starting to pay off. Inspired by some great posts on artist process by Brian Fies and an interview with Pulitzer Prize winning writer Junot Diaz (who said that his discard pile of crap writing is enormous) I thought I’d share a bit of my own recent process. 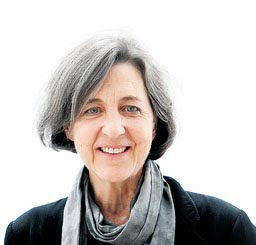 “As doctors, nurses, social workers, chaplains, persons, relative strangers, come to us and give accounts of themselves which center on trouble. The background is always the presence of death. It took me about a year in medical practice to see that what they paid me to do was listen dutifully to their stories.”

I found this photo of Rita on a Greek website, and felt it captured my sense of her essence – warm, kind, stylish, with a nova-bright inner light.

Here are my learned lessons thusfar:

1. Drawing is about geometry & proportions. In people, that geometry is biometrics. How far apart are their eyes, where do they sit with relation to their hairline, their ears, where do their eyes sit relative to their nose, how long is the face vs. wide, what is the angle of the mouth, proportion of the face covered, etc, etc, etc. Stuff you would never really notice about a person until you try to re-create their face. As you sketch, re-sketch, sculpt with an eraser, these are the questions going through your head. I have found it helpful to draw marker lines on the reference photo face. Your lines may vary. 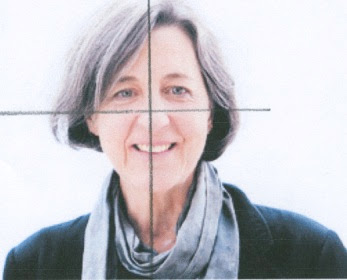 2. Draw large. My first attempt at was about the same size as some of the other illustrations for my book, about 6×4. (my apologies to Dr. Charon.) 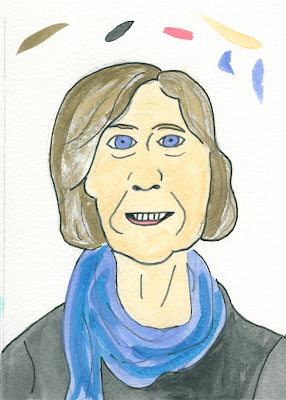 My next attempt at this portrait is about 9×12. That leads right into the third lesson –

3. If it isn’t right, no matter how much time I’ve invested in the existing drawing, no matter when the deadline, and whatever else I should be doing instead, I must start over.

Which, in turn, leads right into my fourth lesson –

4. Integrate the easel. I’ve set up a remote drawing station out of my studio, on a big board, in a common area of the house. When watching movies or TV, or chatting with friends, I can do a touch here, a touch there, add a color, constantly reassessing if the piece is working, but not spend an entire day on it. This has been invaluable. And it takes some of the pressure to be perfect and productive off the hours I do spend in the studio . This approach may not work well for others, but with someone with limited patience but endless drive to create like myself, it seems to be working. A somewhat mess-tolerant spouse/roommate/family is also required here. I’ve been very fortunate in that regard. I’ve found people actually love to witness art in process.

And here’s where I’m at after working on it all weekend – we’ll see if this makes the cut. 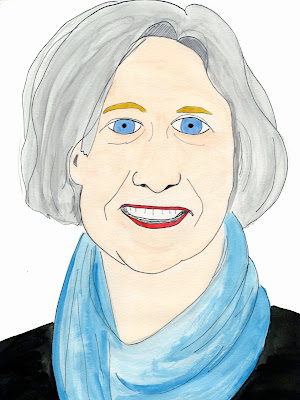