When I’ve discussed why comics should be taken more seriously and used in medicine, I’ve always talked about how they uniquely allow us to access both our left and right brain hemispheres. The left brain, so it’s believed, is used when processing text. The left brain is verbal, rational. According to Richard Bergland’s 1985 book Fabric of Mind, the left brain, “reduces thoughts to numbers, letters, and words.” But when we process our thoughts by also engaging images, as comics give us the opportunity to do, we bring in our right brain, which is used to communicate, again in Bergland’s words, in “patterns and pictures.” 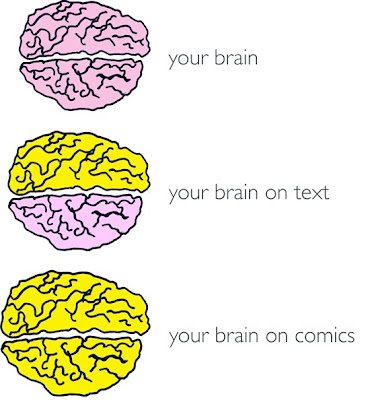 Betty Edwards book Drawing on the Right Side of the Brain was based on this premise, and her students had amazing success learning to draw using techniques that ‘trick’ your brain into using the right hemisphere. 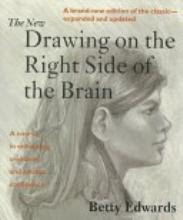 But I’ve always thought this model must be too simplistic. In fact, before I presented what I discuss above in a medical humanities class, I cleared it with a classmate who happened to be a neuroscience researcher. (How handy was that?) She said that my descriptions (and certainly my drawings) were gross oversimplifications, but that nothing I was saying could really be disputed by research she was aware of. And this still seems to be true.

But the devil is in the details, of course, and in looking into this again for a presentation I’m giving next week, I’ve found a fascinating (and encouraging) wrinkle about how the brain communicates with relation to art. There may also be important stuff going on between the front and the back of the brain that is relevant to comics – particularly relevant to me making them.

In a book called The Midnight Disease: The Drive to Write, Writer’s Block, and the Creative Mind, Dr. Alice Flaherty points to the communication between the front of the brain and the rear, or the frontal and temporal lobes. They appear to be involved in mitigating creative drive. Her research shows that the left and right brain hemisphere models are good at predicting what is involved in particular domains of creativity, whether it’s art or music, or literature. But the left/right brain model is not so good at talking about creative drive, that is, why we strive to communicate creatively, to make things like comics at all. She says in an interview, “Creative drive is way more important than talent. In fact there is a fair amount of evidence that over an IQ of 115, increasing your knowledge (IQ) doesn’t really help your creativity, there’s a threshold. What’s really important is drive.”

This research excites me because I have creative drive, by the truckloads. My frontal & temporal are in high gear. What I’m still struggling with are some of the finer, more technical aspects of drawing and cartooning. To paraphrase a quote I heard once by Roseanne Barr, I was born with the blessing of a strong drive to create but with none of the accompanying talent. Most of you who have seen my efforts have been kind enough not to make too fine a point of this, or have focused on the positive when talking about my work. This is greatly appreciated.

I have always vehemently resisted “how do” drawing and comic-making books that propose that they can teach anyone to become a great draw-er or cartoonist. It seems to me that the only thing another artist can teach you is how to draw or make comics like them. And I don’t want to draw comics like anyone else. I want to bring forth my own style. I learn how to make comics by reading great comics. This is where I do my work. I practically slept with Alison Bechdel’s Fun Home under my pillow for a week hoping it would somehow oooze up into my brain. And I seek out and pour over the details of artists of all stripes talking about their creative process. This I can learn from, and I do. (Thank you, Terri Gross.)

I have noticed that what I’d hoped would happen — that what I’ve repeatedly told others in order to wish it into reality — does seem to hold true. The more you draw, the better you get. Duh. Practice, practice, practice. Turns out there’s a reason anyone who is good at anything will tell you this. Illustrations I’m doing today are far closer to what I’m intending to bring forth than ones I did when I started in January. For those of you who happen to be depicted early in my current project, take heart. I’ll redo your portrait before the book goes to print.

Flaherty’s research came to me via a public radio show called Studio 360. You can listen to the full story here.