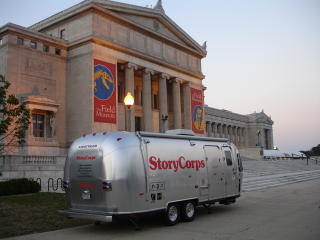 The StoryCorps mobile booth has been in front of the Field Museum in Chicago for the past few weeks. Last night the founder, Dave Isay, spoke at an NPR event at the Harold Washington Library. It was a listening party. As those of us in the audience took our seats, a projector scrolled through a slideshow of participant photos. The people in them looked so happy. But I’m getting ahead of myself.

The stated mission of StoryCorps is to “inspire and enable people to record each other’s story in sound.” This is done in a booth – two are permanent in NY and two are specially designed Airstream trailers traveling the country right now. The booth has two chairs – participants report that it is a very soothing, comfortable enviornment.

You make a reservation to come to the booth by yourself or, preferably, with someone you want to interview and/or who will interview you. A faciliator is present to help walk you through the process and record the 40minute session. You and your companion set the pace, ask the questions, talk about whatever you want to talk about. At the end of the 40 minutes, your photo is taken with a digital camera, you sign a release if you are willing (Isay reported that 99% of people do sign the release) and you are given a CD copy of your conversation. A second CD goes to The Library of Congress. Excerpts are currently being played on Fridays during Morning Edition on NPR.

The recordings are incredible. People are bearing witness to their love, their grief, their passions. By creating sacred space in the booths, Isay has allowed profound honesty to emerge in a way it often doesn’t in everyday life. One NY cab driver says of his fiancee, lost in 9/11: “I’ll see her again. I’ll do enough good to make it up there.” Another man proposes to his unsuspecting girlfriend during their session. From listening to hundreds of these pieces, Isay is convinced that truly listening to another is an act of love – and you can definitely hear it. Who knew you could hear love?

The idea for StoryCorps stemmed from an NPR piece Isay did called Get A Life 101. In it, two Chicago teens interviewed their family members and friends to create a portrait of life in the projects. He has also been listening to the WPA recordings from the 30’s, many done by Stetson Kennedy and made famous by Studs Terkel, after whom Isay named one of the mobile booths. Studs, the father of the oral history, was interviewed for 70 minutes at his home this past week As Isay said last night, “this is Studs’ thing. We’re just walking in his shoes.”

Another wonderful aspect of StoryCorps is the focus on the diversity of participants – Isay believes strongly that everyone matters and he has done much to make this clear. Oddly, though the listeners of public radio tend to not be a very diverse group, the participants in the StoryCorps project are, as evidenced by the photo slideshow. Just about all ages and ethnicities appear to be represented.

What are the recurring themes Isay hears in the recordings? He reports them as love,
parenting, being and having kids, and ultimately, the realization that more unites humanity than divides it. He said traveling the country it has been amazing to witness how hungry people are for this kind of project.

Isay encouraged all who are inspired by StoryCorps to take up their own projects. “We all have the capacity to do this work,” he said. On the StoryCorps website he provides suggested starter questions, and full instructions on how to participate in his project or to undertake this kind of project yourself.