In anticipation of the Graphic Mundi updated reprinting of Taking Turns: Stories from HIV/AIDS Care Unit 371 in November, I am sharing parts of the book’s backstory. In this post, I’d like to share more about conducting the oral history that informed the book.

During my Master’s degree in Medical Humanities & Bioethics at Northwestern (2007-2009), I took a course called, “History of Medicine” with Dr. Alice Dreger. The final assignment for our class was to propose a project to demonstrate that we had learned how to apply the tools of historical analysis. We weren’t meant to actually do the project, rather tell how we would do the project. My proposal discussed conducting an oral history of the AIDS unit where I’d worked, which had closed around 2000. I documented Dr. Dreger’s response to my proposal in comic form at the time. 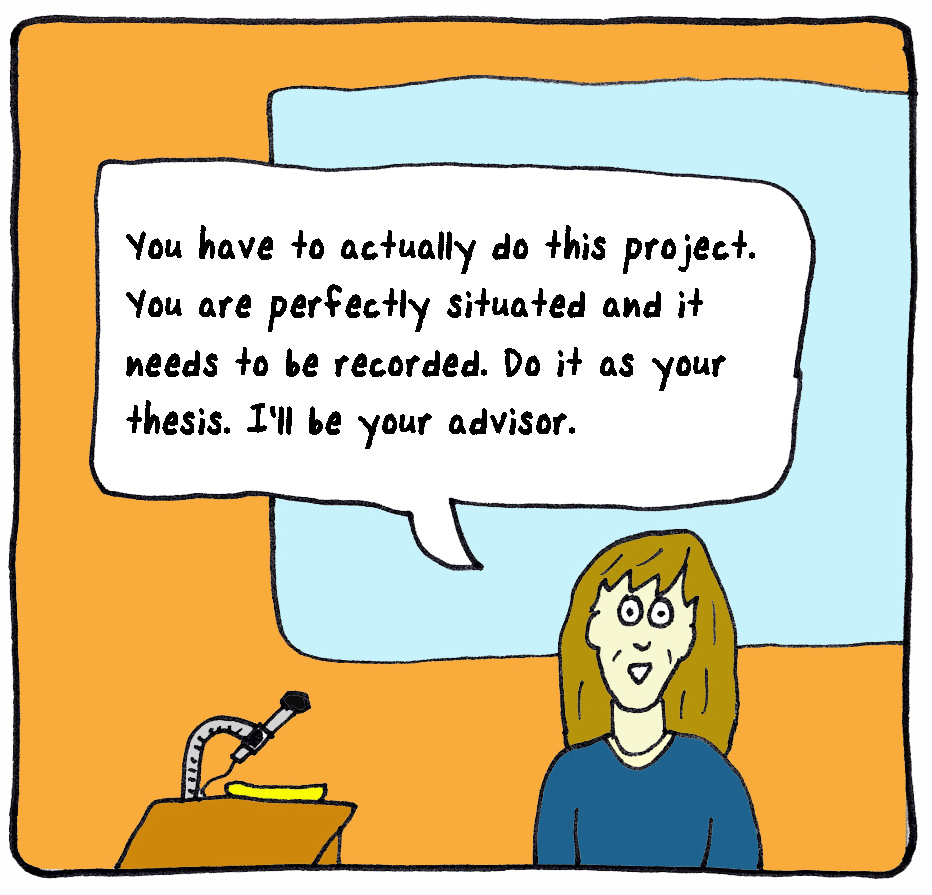 And she was. You can read Dr. Dreger’s account of our work together, and how it led to Taking Turns, in her blog post here.

Before I could do my thesis as an oral history (which is original research, not what a Master’s thesis really should be, BTW) I had to learn how to do oral history.   No small task. Fortunately Dr. Gretchen Case was willing to teach a long-distance, one-on-one, independent study to prepare me for conducting interviews. It was important in this context to include guiding me around attending to potential issues that arise when doing such a project. I still have all the notes from that summer, and consult them frequently.

Dr. Case created a terrific reading list that was general enough to teach me how to structure my project ethically, how to approach my interviews, and how to begin to think about what to do with the interviews once they were done. Some specific readings included:

DO I LIKE THEM TOO MUCH? Effects of the oral history interview on the interviewer and vice-versa – Valerie Yow

Bearing Witness or the Vicissitudes of Listening – Dorie Laub

The Death of Luigi Trastulli and Other Stories – Alessandro Portelli – can’t resist including a few relevant quotes from this one.

And, as I mentioned in a previous post, I’m very influenced by the work of Studs Terkel. Many aspects of this project — the form and tone of the interviews, how I processed them for my thesis, and, surprisingly, how I approach making comics, are influenced by Terkel’s writing and speaking.

After those readings and discussing them with Dr. Case in class, I began to conduct “test interviews.” I interviewed my Mom and a few good friends. What I learned from those initial interviews was INTERVIEW YOUR FAMILY AND FRIENDS! It’s an incredibly rewarding process and I guarantee you will learn and cherish things you never knew about people you thought you knew. My mother died about ten years after that interview and I am incredibly grateful to have that audio and those memories. 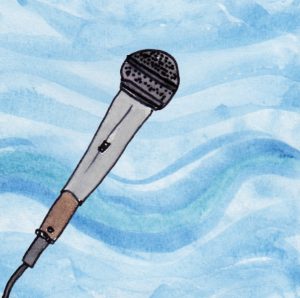 Between 2008 and 2012, I conducted my oral history of Unit 371. I used a life-review format for the interviews. We used a consent form so my narrators were aware that this wasn’t a casual conversation between old coworkers or friends. Twenty-five narrators from diverse perspectives sat down for interviews that lasted from one to two hours. I transcribed each of those interviews myself. My narrators then approved their transcripts and were able to redact anything they didn’t want published publicly. I only had to do one interview over because the recorder wasn’t running. Only one person agreed to be interviewed then decided it would be too hard and backed out. One beloved person died before I was able to interview her. One person agreed to be interviewed then redacted the entire interview. Two people reached out once the project was written about in Windy City Times and wanted their memories included. People opened their lives, homes, and hearts to share memories, regrets, grief, joy, confusion, funny stories, photographs and scrapbooks. They came with lists of their loved ones who had died. All of this was an enormous gift that I appreciate and treasure. 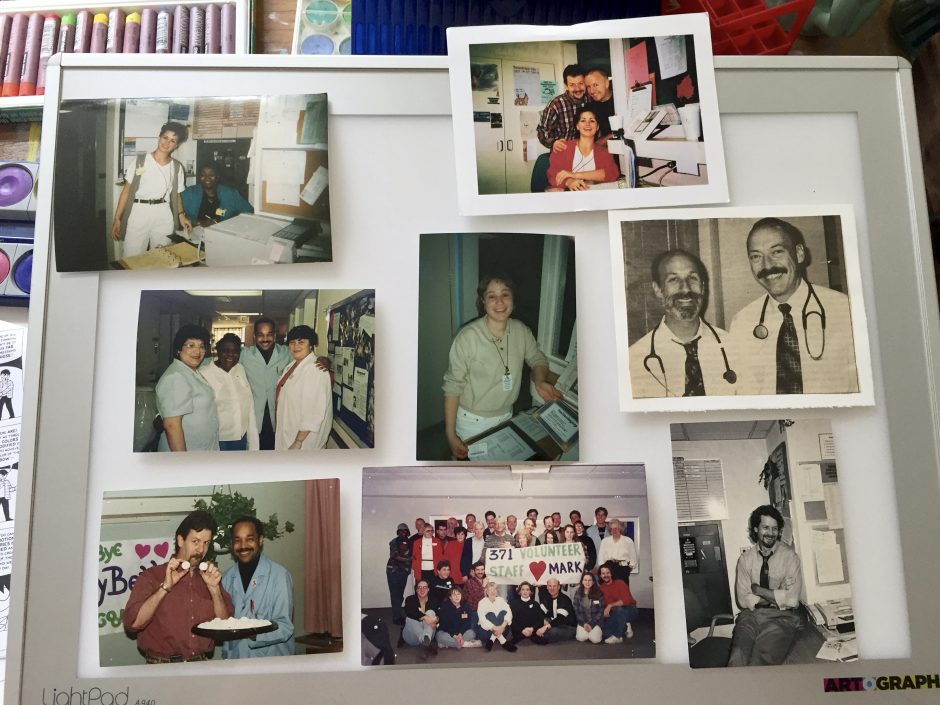 Studs Terkel never really spoke about how he went from transcriptions of interview audio to what was published in his many books. But looking back at those books for guidance, and looking at my interview transcripts, I realized that if you pull out the questions, then knit the answers together into coherent sentences and paragraphs, a narrative will organically emerge. It’s kind of magical. So that’s what I did, and that, with some initial analysis, was my MA thesis. 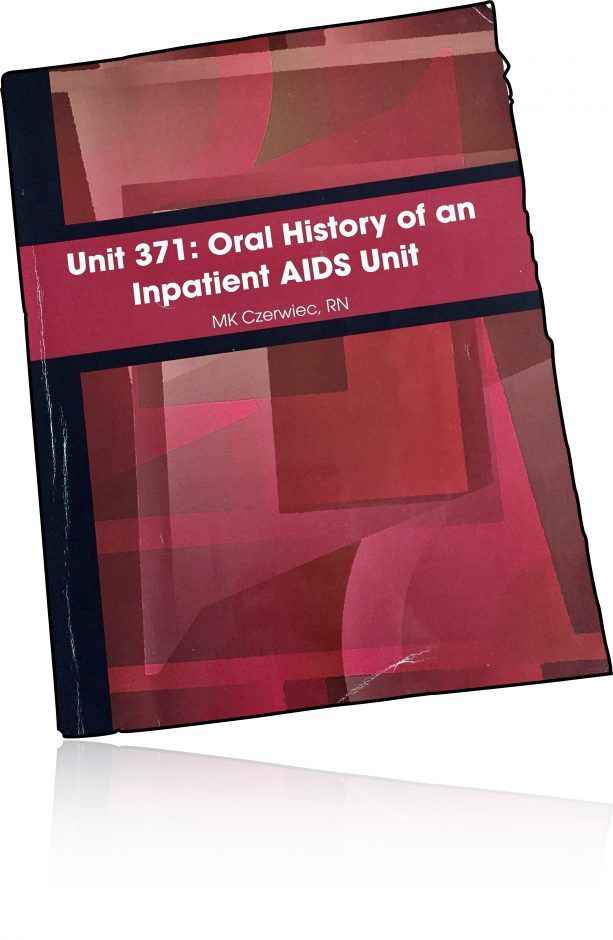 After graduation I had to figure out how to turn these interviews into comics, ones that would somehow follow a compelling narrative. That’s for another post.