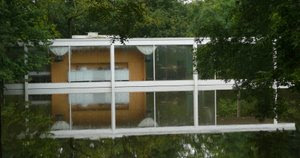 By Vikki Ortiz, from the Chicago Tribune

While homeowners along the Fox River fretted over damage to their homes, architectural and historical experts worried about the fate of the Farnsworth House, a historic site in Plano considered an icon in modern architecture.

As of midday Sunday, floodwaters rose above the 5-foot risers on which the steel and glass home sits, leaving its interior covered in another 2 feet of water, said Whitney French, historic site director.

“It’s gut-wrenching,” French said. “You have to come to terms with the fact that Mother Nature will always win in a power struggle.”

Employees at the Farnsworth House used boats to reach the home Saturday and lift the designer furniture away from the water.

Some pieces, including a custom-designed wardrobe bound to the floor, could not be saved. Officials could not yet estimate the cost of the damage.

Completed in 1951, the house was built by Ludwig Mies van der Rohe as a country retreat for a Chicago doctor, Edith Farnsworth, and is a clear example of his philosophy that “less is more.”

The architect suspended its floor slab to allow floodwaters to run beneath the house. Still, waters have risen above the raised level six times in 60 years, French said.

In 1996, the Fox River smashed through one of the house’s huge plate-glass windows. Surging floodwaters attacked the inside of the one-room, rectangular house, submerging it in 51/2 feet of water and causing $500,000 in damage.

Farnsworth House damage “could have been a lot worse”; house likely to close for rest of year

Mies van der Rohe’s Farnsworth House, took a hit–but not a knockout blow–from the rampaging Fox River and the house is likely to be closed to tour groups for the rest of this year, historic preservationists said Monday. They issued an online appeal for contributions to help them restore the modernist masterpiece.

Swelled by the remnants of Hurricane Ike, the Fox dumped 18 inches of water in the house, leaving a residue of river mud on the travertine marble floors, damaging the house’s wardrobe and possibly warping some of the honey-colored primavera wood that wraps around the house’s interior core, preservationists said. But no windows shattered–the water seeped in, instead, through the front door–and there appears to be no structural damage.

“It’s very definitely our worst nightmare, but it could have been a lot worse without a doubt,” said Justin Lyons, director of marketing and development for Landmarks Illinois, the Chicago-based advocacy group that manages the house for the owner, the Washington-based National Trust for Historic Preservation. The house probably will not reopen for tours until next spring, he said, resulting in lost revenue of $60,000 to $70,000.

Mies raised the 57-year-old steel-and-glass house on steel columns that were supposed to allow the floodwaters of the Fox River to pass beneath it. But some say that the river now rises higher than it did decades ago because suburban sprawl in the Fox River’s floodplain has paved over ground that once could soak up water. “Too many parking lots and hard surface rather than water going in the earth,” Chicago architect Dirk Lohan, Mies’ grandson, said Monday.

More for information, go to the Web site of Landmarks Illinois.

One thought on “The Farnsworth Update”