President Obama seems to be dropping the option of providing insurance to all as part of health care reform. This is unfortunate for many reasons. One very immediate and problematic reason that all of us should be insured is that our country’s emergency rooms are crowded with primary care patients who can’t afford to go to a doctor’s office. An emergency room can’t turn patients with no money away, a doctor’s office can.

Another reason it’s unfortunate that President Obama is abandoning something he hoped to achieve during his Presidency is strategic. What else is he going to sacrifice to political wrangling? And what kind of precedent is set? If the opposition puts up a big enough fight, the goal is abandoned?

Obama needs to take a lesson from Lyndon Johnson. I know, I know, Johnson is not remembered fondly due to his dogged insistence that we could win in Vietnam, and all the destruction and loss of life that produced. Fair enough.

But the shadow side of that insane determination was that Johnson was incredibly successful with Congress. When it came to passing legislation that he felt passionately about, such as Medicare and Medicaid, the original health care reform legislation, Johnson knew how to get legislation passed without sacrificing important features.

How did he do this? It was known as The Johnson Treatment. According to historian and Johnson biographer Doris Kearns Goodwin (via the Daily Beast)

[Johnson] often said that Congress had to be with you on the takeoff so they’d be with you on the landing. That philosophy Obama followed in giving Congress a leadership role in drafting the health care bill. After the debacle of the Clinton administration’s secret task force it made double sense. And add to that the understanding that Democrats on the Hill have been waiting for years for their moment in the sun.

LBJ also understood that the president was the ultimate weapon and thus had to be held in reserve until the moment was right, but this is the critical moment we are at today. This is the moment, LBJ would suggest, when the president has to take charge, to draw lines, to pressure, to threaten, to cajole, to exert every resource of leadership he has—to put pressure on wavering Democrats to make it clear that losing health care will be a huge blow not only to him but to all Democrats who were brought into office on the promise of big change, and particularly on health care.

LBJ used to have big charts where he could know which congressman or senator he needed to call at every instant. He would then invite them to breakfast, cocktails, call them at any hour of the day or night. He called one senator at 3 a.m. and said to the senator, ‘I hope I didn’t wake you up,’ and the senator replied, ‘Oh no, I was just lying here hoping my president would call.’ So this is the moment for Obama to mobilize his troops in the field, to play hard ball, to do whatever it takes to get a bill passed. LBJ once said it was fine if final votes were razor thin, even with big majorities in the Congress, for that meant he had secured the maximum provisions he wanted, rather than compromising too early and too much.

Here’s what that looked like in person. I think Obama could pull it off. 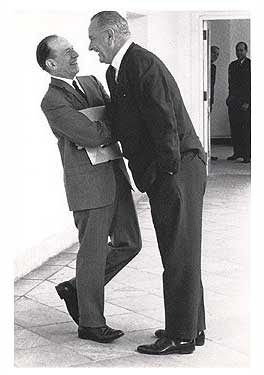 3 thoughts on “The Obama Treatment?”